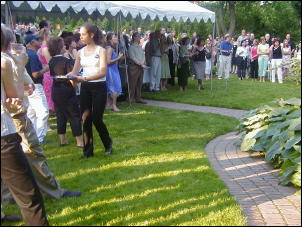 A Tudor mansion. Long afternoon shadows. A lush backyard. A white tent. Chamber music. Appetizers passed by hand. Red, white and blue balloons. If the Barista didn’t know better, she’d think she’d followed a white rabbit to a GOP fundraiser. Really, though, she was in the sumptuous backyard of Marcia Marley and Peter Rappoport of Montclair, who hosted 300 local liberals who were willing to pay $100 a head for a single cause: sending George W. Bush back to Crawford, Texas in November.
What, you never heard of limousine SUV liberals?
Though the Barista’s heels kept sinking into the grass and the humidity became oppressive, it was a great party. The only children in sight were carrying plates of food. (Always a good sign at a party.) The Barista indulged in a few quesadilla thingies and said hi to lots of pinkos she’s more used to running into temple or the school play.
Then they piped in the voice of Kerry himself, who sounded impressively Presidential. (Speech coaching from Bill Clinton? Or is it just that Kerry’s easier on the ears than he is the eyes? Barista to Kerry: radio.)

As it happened, Kerry’s talk was simulcast to Kerry house parties going on all over the country. Afterwards, Kerry’s better-looking brother Cam showed up in person to stump for his sib. RFK to Kerry’s JFK?
The take: $80,000. Sure, Republicans could raise that by shaking out their pockets, but it’s nice to know that the Teva crowd has made enough money to fete the party that worries about people who can’t throw parties like this.
AHEAD an even better garden party for the true high-wage Democrat: Bon Jovi’s house in Red Bank on June 14, with the candidate himself. $1,000 per person — or $25,000 if you want to show up an hour ahead and hobnob with others of your class.