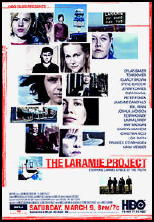 Punks may be scratching anti-Semitic slogans on cars and leaving swastika graffiti on walls, but the Glen Ridge Drama Club is fighting hate with its production of the Laramie Project, the story of the brutal 1998 killing of Matthew Shepard in Laramie, Wyoming.
The production will include a film of events in Laramie, which was shot at local locations like the Montclair Art Museum and Hurrell Field in Glen Ridge.
Darren Gage, drama club advisor and the play’s director, was a little worried that the play, which deals with issues of gay rights, might spark some protest. We’ll see.
Tonight and tomorrow night at 8pm, Ridgewood Avenue School. (Corner of Ridgewood and Bloomfield) Free.