Earlier this month, Glen Ridge Police discovered two back-to-back incidents of hate-filled vandalism. The first involved swastikas and homophobic remarks painted on Ridgewood Avenue School. In the second, someone scratched the words “Jew Boy” into the car of schools superintendent Daniel Fishbein. As soon as word got out, several members of the local clergy convened at the Nevada Diner. The result of that powpow was a public meeting at the Glen Ridge Congregational Church tonight, attended by about 100 townspeople as well as such heavy hitters as the ADL’s Shai Goldstein (pictured, left), Sarah Elshazly of the NJ Office of Attorney General, Frank Vespa-Papaleo, a Glen Ridge resident and director of the state’s Division on Civil Rights, Thomas Culp of the state Office of Bias Crime, and Lori Price Abrams of the United Jewish Communities of Metrowest.
Police arrested a 17-year-old Glen Ridge High School student for the “Jew Boy” incident last week, but Rabbi Steve Kushner delivered some sobering news for anybody who thought that might be the end of it. Just this morning he received a call from a congregant in Montclair who’d discovered, on his doorstep, rabid anti-Semitic literature from an organized hate group called the National Alliance. 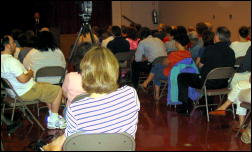 Problems involving hateful teenagers aren’t exactly new in Glen Ridge. There was, of course, the Glen Ridge rape case of 1989. And then, 10 years ago, there was a spate of vandalism that included the egging of Rabbi Kushner’s house, which led to the formation of the Glen Ridge Human Relations Committee. Around town, there are people who subscribe to the theory that airing such incidents is bad PR. Those weren’t the folks who showed up tonight.
In fact, the meeting was a diversity-fest and magnet for people who worry about all varieties of hate and discrimination. Speakers included partners in gay and interracial households and parents of special ed kids, who get bullied for just being weird. A Glen Ridge High Shool senior named Valerie Cook complained about the school’s jockocracy and about getting a chilly reception when she moved to town a few years ago from Montclair.

The guest representatives from the state and the ADL offered all kinds of special programs to deal with each one of these concerns. All they needed, they said, was an invitation from the schools. Notably absent from the event were the people needed to extend such an invitation — as Superintendent Fishbein and the school board were engaged in the regularly-scheduled Board of Ed meeting across the street.
The problem, as Sondra Lefkowitz, one of the founding members of the old Human Relations Committee, pointed out, was that “you’re preaching to the converted” — something that nobody on the panel could dispute. Although Shai Goldstein congratulated Glen Ridge for coming together for this meeting — “This community gets it. This police department gets it. You are to be congratulated” — he didn’t have a real answer for Lefkowitz’s point. The truth is we have neighbors who burn with hatred and rage. And they’re not the ones who show up for meetings like this.
If you missed it, the meeting will be broadcast on Channel 36, Tuesday at 9 pm, and Saturday and Sunday at 8 pm.