At a fundraising gala that included the talents of bellydancer Morgiana (left), 12 Miles West announced plans tonight to move its theatrical operations to the Robert’s Lost Picture Show in downtown Bloomfield. The theater’s lease in the Clairidge Theater building ends next month.
Artistic director Lenny Bart said that 12 Miles West is negotiating a net lease with an option to buy and hopes to be in the building by Aug. 1. The theater plans a $1 million capital campaign to finance the move. 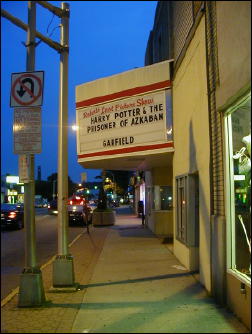 It got a start on fundraising efforts tonight. Among the items auctioned off: an Arabian Night’s Feast (including the talents of Morgiana) for $415, a one-week stay in Clearwater Beach, Fla. for $570 and … the opportunity to appear onstage in a 12 Miles West production without an audition for $310.
Click here to sign up for Baristanet's free daily emails and news alerts.