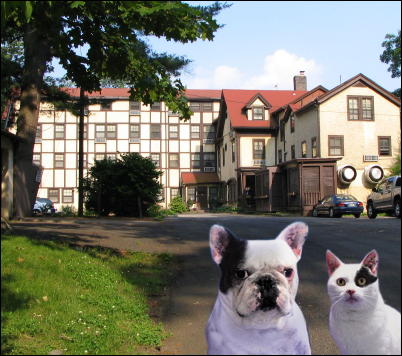 Montclair real estate mogul Steven Plofker has abandoned plans to demolish the historic Marlboro Inn and construct custom homes there in a favor of a new plan: turning the inn into a gigantic animal shelter.
Animal advocates in Montclair have been in an uproar lately because the township of Montclair has been thinking of getting rid of the PAWS shelter on Willow Street, in favor of a tony new sushi place or something else that could bring in tax revenues.
Plofker had been following the posts about PAWS on the Montclair Watercooler, and melted when he saw this picture of a boxer-hound mix called “Jaguar” (seen on right.)


“I’m a sucker for a Jaguar,” he said. “And I like dogs too. Then I thought: a run-down inn and lots of unwanted animals. What a perfect mix. We won’t even have to replace the carpeting.”

In keeping with Plofker’s high-end development style, the new Marlboro PAWS will be loaded with pet amenities, such as a puppy concierge, yoga classes for cats and a 24-hour hair salon for poodles and long-hairs.
Show up at the Town Council meeting tonight to congratulate Montclair on the plan.
(Disclaimer: For humor purposes only. All facts and quotes are made up.)
Baristanet Local Offers