FOR SALE: 3 BR Colonial, nice landscaping, occasional helicopters. $549,000.
When news broke this week that Martha Stewart’s childhood home in Nutley was for sale, the Cheneys — who own the house now — were a bit unprepared for the media storm. “My realtor called me and said, ‘Don’t get scared if you hear a helicopter,'” said Angela Cheney. (No relation to the veep.) Minutes later, the Fox 5 chopper was circling over her house at 86 Elm Street. Since then it’s been a deluge of reporters and drive-by curiousity seekers.
“This will go on all day now,” she told the Barista this morning, standing in her front yard, as cars driving down Elm Place slowed down in front of her house.
The Cheneys, who bought the house from the Kostyras (Martha Stewart’s parents) 18 years ago, aren’t exactly newbies when it comes to media attention. Martha returned to the house last September when she was inducted into the Nutley Hall of Fame and Barbara Walters has also dragged a TV crew to the house for a TV special on the domestic doyenne.
But the Cheneys are of mixed emotions as to how the publicity will play out now that their house is up for sale.
“I didn’t want it to be like a museum tour,” Angela said. “Our purpose is just to find good neighbors for our neighbors.”
On the other hand, 16-year-old Brianna, who was mowing the lawn this morning, revels in all the publicity. “I love it,” she said. “It’s a lot of fun.”
Across the street, neighbor Beatrice Bergen, who has lived on Elm Place since 1968, was busy gardening. She told us that Martha’s father was an inveterate gardener, who taught her the basics of making things grow. “When I got married I didn’t know a petunia from a turnip,” she said. “So he took pity.”
Serious buyers should contact the listing agent, Century 21’s Pat O’Connell. 973.751.8800.
Click here to sign up for Baristanet's free daily emails and news alerts. 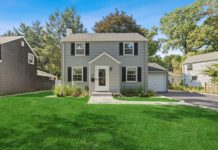 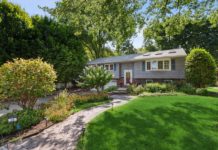 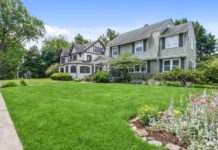