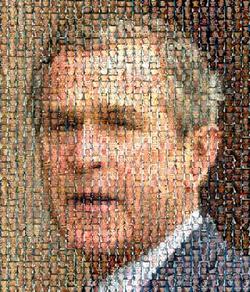 We’d seen this portrait of George Bush — made up of pictures of American soldiers killed in Iraq — floating around the web. We heard yesterday that it’s the work of local artist Eric Baker, who owns a design studio in New York. But it turns out that’s not true.
“I wish it was,” says Baker. “Somebody sent it to me and I sent it out to a gazillion people.” Baker also got a query from neighbor and New York Times media reporter David Carr, wondering if he was the man behind the image.
Baker, who knows a thing or two about art, says the Bush death image is created by a software program. “This is one of those anonymous images that flies around the world,” he said.
The Barista apologizes for attributing it incorrectly to Baker first time around.
Click on the picture for larger image.