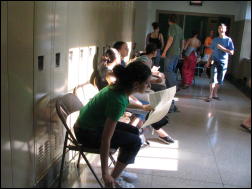 The Barista crossed out of the official circulation area yesterday to take her kids to auditions for “Les Miz” in Little Falls.
It’s the annual joint venture between Glen Ridge High School and Passaic Valley High, and this year they’re rehearsing and performing at Passaic Valley High, which — unlike Glen Ridge — actually has an air-conditioned auditorium. Ahem.
Meanwhile, Glen Ridge’s leading lady of theater, Jessica Sporn, wants people to know that it’s official: the fall musical for The Gas Lamp Players will be “Oliver.” The Players briefly flirted the idea of staging “Gypsy,” but rejected it as too racy.
And one more local theatrical note, we heard that Darren Gage, advisor to the Glen Ridge High School’s drama club, won’t be able to take the job next year. He’s got to buckle down and finish getting his Ph.D. A loss for the program, but good luck, Darren!