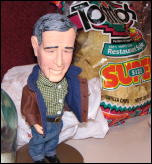 In a scene that was somewhat reminscent of the first days of the telephone, 56 local and not-so-local liberals showed up at Luna Stage tonight to hear filmmaker Michael Moore via internet transmission at a “Turn Up the Heat” party. The event was one of 3,000 being held nationwide and at least three held in Montclair, and was organized by the anti-Bush group, moveon.org.
The technology was impressive, except when it wasn’t. On the plus side, there was a map that showed great big white dots representing “Turn Up the Heat” parties and listing the numbers of participants.And the set-up allowed people to send text questions to Moore. On the minus side, a Moveon.org slide show prepared for the event wouldn’t play. And the lib-erati had to content itself with looking at the interactive map, rather the gargantuan Moore himself, during his talk.
The technological glitches didn’t dampen the enthusiasm of the crowd, which included people from Pompton Lakes, Westwood, Roseland, Roselle — and even a visitor from Hong Kong. The room roared with delight when Moore told them that his movie, “Fahrenheit 9/11,” was not just the #1 movie this past weekend, but the #1 movie in all the red states. Take that, Mel Gibson… I mean, George Bush. 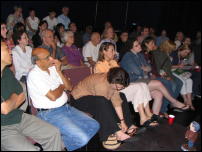 After Moore’s talk, moveon.org recruited people to run telephone parties on July 11th to sign up unregistered voters. The party was hosted by local actor Michael Aquino, who rented the room from Luna Stage.