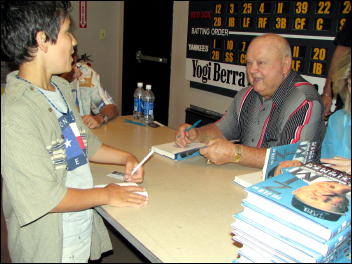 Former Yankees bench coach Don Zimmer dropped by the Yogi Berra Museum today on his way to the Bronx, where the Yankees will be playing the Tampa Bay Devil Rays tonight. Zimmer, who signed on as the Devil Rays’ senior advisor this winter, was autographing copies of his new book, “The Zen of Zim: Baseballs, Beanballs, and Bosses.”
Along with hundreds of others, the Barista went, bought the book, got the autograph and took a picture. But she also brought along her senior baseball correspondent Noah Levinson to ask the tough questions.
Levinson asked Zimmer to compare his old boss, Joe Torre, to his new one, the fiery Lou Piniella (who wrote the foreword of the book.) Zimmer started with Torre — “quiet, laid back” — and when he got to Piniella, he paused — as if searching for just the right words to define his new boss. “Wow,” he said, laughing. “Lou lets it all hang out.” But it’s what he said next that we thought was news making.
For his whole 55-year baseball career, Zimmer said, he sat on the bench. Now, during games, he sits in the stands or in the clubhouse. “I’m not used to it,” he said. “And I’m not sure if I like it enough to come back next year.” 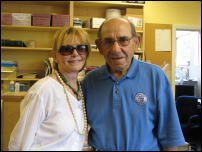 We also spotted Carmen Berra talking to Zimmer, and she was kind enough to let us snap a picture of her and her husband Yogi in the museum’s office, where Yogi was taking refuge from the hordes.
So it was what the Barista might call a double espresso: a baseball scoop and a Yogi sighting in one day.