Remember Mr. Rogers (yes, I know I’m dating myself)? He used to go around and get to know people in the neighborhood. And there were always lots of interesting people. We think that’s true of our corner of the world, too. We’d like to get to know — and let you know, too — the people from different walks of life that make life interesting in Baristaville. Baristanet launches a new feature, “Coffee With…,” a chance to have coffee (virtually) and get to know our neighbors a little better. We sat down with Samantha Codling, owner of The Pie Store in Montclair.
Know someone you think we should have coffee with? Write us here.
Tell us about yourself.
I’ve been here in the U.S. for 12 years. When I first came here, I did photo styling and food styling for lots of different people — advertising, magazines, restaurants — that kind of thing.

So you came to the U.S. for your job?

It entails, sometimes, making up a dish – so you get a spec sheet and you make up items like a curry or cracker on cheese for a company, or make it look good for the packaging.
Basically, it means getting all the ingredients and putting it together to make it what the client wants.
Is it a very competitive industry?
It is. It’s hard to get jobs. You’ve got to get known. In the end, I was also doing room sets, jewelry styling and lots of different stuff.
Is your background in fashion?
I went to school for textiles and fashion in London, but I’ve always been interested in food.
What drew you to Montclair as a business owner?
When I first started living in Montclair, I was still doing photo styling. But Montclair seems the perfect place – it’s so eclectic and quite transient, a lot of well-traveled people, as well. Montclair seemed like a really good place for some sort of different food retail and there wasn’t anything like this.
What would you say your most popular item is?
It’s seasonal. In the winter, it’s definitely the Turkey Stuffing Pie or the Steak and Mushroom Pie. In the summer, it’s more the fruit pies, like strawberry, rhubarb, key lime and the cherry pies.
What would you say your most popular non-pie item is?
The chocolate, definitely.
What’s the difference between American and British-made chocolate?
The English chocolate is sort of creamy and chocolatey and smooth and is made with sugar. The American chocolate is, to my taste, waxy, over-sweet and not chocolatey and made with corn syrup.
Do you see a real difference between the British and American palates?
A huge difference. The meat pies — not so much of a difference, except for the fact there’s meat in the pie, which is unusual to a lot of Americans. The difference in the sweet pies (the fruit pies) is a lot. Americans like a lot sweeter pies for dessert and very heavily laden with cinnamon and stuff like that.
When we first opened, we only made savory pies; we didn’t make any fruit pies and then we realized when we had people coming in the door asking for apple pie and rhubarb pie that we had to make fruit pies.
We started making pies without cinnamon, which was a mistake, as well. So now we make pies with cinnamon and sugar. If you’ve grown up in America, you’ve grown up with sweet desserts. In the U.K., desserts aren’t quite sweet.
What do you like most about being a small business owner in Montclair?
Getting in sort of the grassroots level where you’re doing everything from scratch and you’re meeting all these people that have such different backgrounds, and everyone is really nice and really enthusiastic about the pies.
I’ve found a lot of people willing to try the pies, even though they don’t know what’s in the meat pies, which is fantastic. English people are way less willing to try something new.
Have you ever had an item discontinued because it was unpopular?
Yeah, sure, a couple of things. One was called a Gala Pie. It was a raised pie made from hot water pastry crust, which holds up to slower cooking for longer temperatures. It had a hard-boiled egg in the middle, sausage meat on the outside and then pastry crust. It was not really understood or liked; English people love it.
Describe your clientele.
Everybody, a whole range of people. Pie appeals to people who grew up eating apple pie. It appeals to people who traveled a lot and eaten different pies. It seems to appeal to a wide range of people from all walks of life and all backgrounds.

Is the meat pie England’s comfort food?
Definitely. Pies evoke some kind of emotion, especially when it’s cold and you want something warm and satisfying. Food is very emotional so you appeal to people’s memories and what they knew as a kid.
Who in the culinary world do you look up to?
Jamie Oliver for his food revolution and his perseverance and getting people to understand what’s in your food and in your product. I like Gordon Ramsay; older cooking legends like U.K. Chef Delia Smith and Heston Blumenthal, who pushes the boundaries of food in the U.K.
What are your thoughts on using organic meat?
I would love to do that; at the moment we’re not. We do use all natural meat, but it’s not organic. The price point is an issue for that (organic). We do everything from scratch; everything’s fresh, all the meats are natural; all the fruit is fresh.
Do you make your own sausage?
We don’t. We buy sausage, but that’s the next thing on our list. All the beef, chicken, turkey and vegetables and fruit are totally fresh. We go through 70 pounds of potatoes a week, 50 pounds of onions and five cases of apples. We try to keep it as natural as possible.
Have you ever thought about opening your own restaurant?
I’ve thought about it. I’m just focused on this now and trying to expand the range of pies and our outlets for pies. We sell to ShopRite and we’re trying to get other accounts and out there as much as possible because it’s an unusual product–it’s a niche market.
What do you find most challenging about being a small business owner?
The seasonal cycle of retail. In the summer, people don’t eat as much pie. They don’t eat as much heavy food, so that’s why we’re going to start offering salads and quiche and lighter fare that you don’t actually have to go home and turn your oven on to cook it.
What would you be doing if you didn’t run The Pie Store?
I think I would still be involved in doing textile design. At some point, I would like to go back to doing that. I’d probably be in the arts field. This is creative in a different way.
How often do you go back to England?
Not enough — three years ago. I’ll probably go back this May. I try to go back every two years to see what’s happening food wise. Supermarkets are so different there than over here. They offer a lot more prepared food and that’s an inspiration.
What kind of advice would you give small business owners who are struggling in this economic climate?
You just got to work through it. You’ve just got to not be discouraged. You will just have the mindset if you think this will pass and the economy will pick up–it’s just so hard.
You just have to try to economize a bit and use everything to your full advantage, and use all your contacts. Email as many people as you can. Try and get yourself out there. Do sales, samples; marketing is always good.
How has business been?
It’s actually been okay. It’s tough, but the products coming through speak for themselves and the quality of food is good. We have a lot of regulars, which is fantastic. A lot of people we see two, three times a week. People that we see religiously on one day of every week. Our customers are great.

Do you see a lot of British customers?
We do. But I have to say the majority of people for the pie are definitely American, not British.
What else would you like to share with Baristanet readers?
The fact that we do seasonal stuff and if anybody has requests, we do listen to people.
We always encourage feedback on a personal level. Come in and tell us what you think.
Good, bad, indifferent–what could be better? 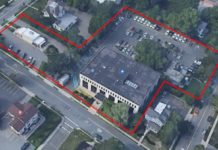