Glen Ridge mourns the loss of long-time resident and town historian, Eleanor S. Webster who passed away last week in Newton Square, PA. Known around town as Terry, the co-founder of the Glen Ridge Historical Society was a relentless champion and inexhaustible detective of town history, who was not above rummaging through attics, garages and basements to find lost documents.

According to fellow GR Historian Sally Meyer, Terry created the Museum Room, which maintains files of architectural blueprints, photos, and documents for every house in town. These files are available to homeowners, and serve as a guideline for original architectural accuracy. “The integrity of restoration in Glen Ridge’s Historic District is primarily due to Terry’s archival research at the Newark Hall of Records — which she began in the late 70’s,” Meyer explained. “Even after she moved away, and right until her death, she kept unearthing new bits of Glen Ridge history, ” she continued.
Private funeral services were held in PA. Terry is survived by her husband, George A. Webster and children G. Steven Webster, of Indianapolis, Ind., Anne Leight Watzek.
You can read Terry’s obituary from the Centre Daily Times here. 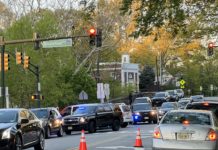