UPDATE:The Essex County Prosecutor’s Office said it is investigating a homicide that took place early this morning at 159 Jacoby Street in Maplewood. The victim, 29-year-old James White of Newark, was pronounced dead at the scene.

The Essex County Prosecutor’s Office is confirming that there was a homicide in Maplewood last night, but says details are sketchy. BNN news wire reported it as a “fatal shooting off Maple Avenue” shortly before 5 a.m.

The prosecutor expects to issue a release with more details later today. We’ll update as we have information 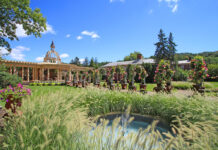