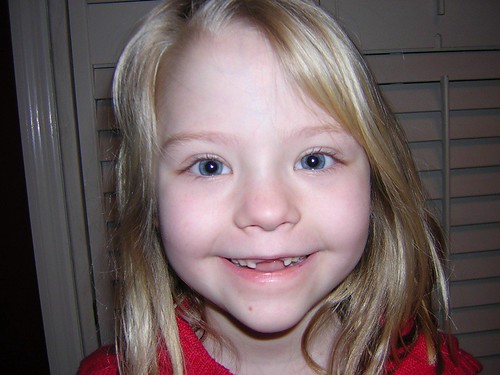 I don’t know what’s up with the Tooth Fairy these days. She must be sitting down on the job or something because on numerous occasions and for both my children she has forgotten to drop in, collect the tooth and leave some cold, hard cash behind. My kids are so used to it by now, they take the disappointment pretty well. My husband and I cover for the Fairy, saying she probably was busy. We’re certain she’ll come if we place the tooth under the pillow again that night. And she usually does.

But, really, what kind of Tooth Fairy does that? A terrible, horrible, no good, very bad one is all I know. I blame my husband. I put him in charge of special projects – the book reports, the odd solar system science project, the miscellaneous oral presentations. And to me mythical creatures fall under that category. I handle the day-to-day stuff – the nightly homework, the shuffling to extracurricular activities, the constant scheduling and rescheduling of three lives (mine plus two kids). I just can’t cram one more thing into my already over-stuffed brain. I know I’ll mess up. That’s why I put Kevin on the job.

Kevin is usually pretty reliable, but every now and then he slips up. Last week at the end of a long wait for a wiggly tooth to fall out, our daughter awoke to find her tooth still under her pillow and no recompense where it should be. Kevin had already left for work, and I felt awful that the stupid Tooth Fairy bungled this one after such a highly anticipated event – for weeks we knew that sucker was moments away from falling out of her head. I felt so awful, in fact, that when my daughter left her room to have breakfast, I overcompensated for the Tooth Fairy’s oversight. I snuck into my daughter’s room and put some cash under a different pillow to fool her into thinking she just missed the money the first time around. Later when Lily went to make her bed she found the $2 I left. (I concluded the money was left along with the tooth because the Tooth Fairy must not have been able to find the tooth in the dark).

Ordinarily, the Tooth Fairy leaves a dollar per tooth so Lily doubled her money on that little mistake. Not too shabby. I actually think $1 is generous for a little, tiny tooth, but I left two because I felt I had to make up for the Fairy’s egregious error. I don’t know what value a tooth has once it’s detached from the head, and I can’t fathom why anyone would pay for someone else’s used tooth. If they do I don’t know why they would pay more than a couple of cents. But that’s just me. My husband thinks our children should be generously compensated for anything they do or anything that falls out of their heads.

Thankfully, we dodged the bullet this time, but we can’t be the only ones with an unruly Fairy on our hands. Has your Tooth Fairy ever gone missing? How did you handle the forgetful Fairy?