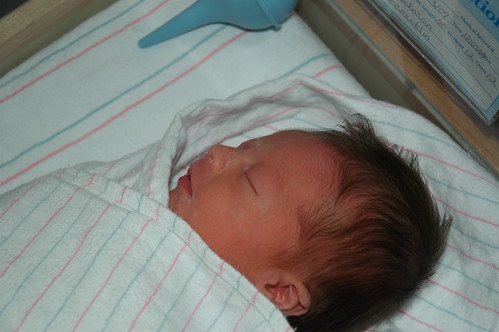 Last month a Canadian couple made headlines when they did just that. The parents gave their 4-month-old infant a good gender-neutral name, Storm (although I think that sounds slightly more boyish than girlish), and sent out an email to family and friends notifying them that they would not be revealing the child’s sex the Toronto Star reported. The Toronto couple claim, however, the information is not a secret but rather a private matter, one they wish to keep that way at least until Storm decides otherwise.

The only people who know the sex of the child aside from the parents, Kathy Witterick and David Stocker, are their two young sons whose names – Kio and Jazz – are gender neutral as well, the midwives who attended the home birth and a close family friend. That’s it. But I do find it hard to imagine the brothers, ages two and five, respectively, are reliable enough to trust with such classified information. One of them is bound to crack – or slip up.

If they don’t and we never find out, I wonder how the family will refer to the child. Will they say, “Give it its bottle,” or, “It needs a diaper change?” Linguistics, though, seem to be a minor matter to the family whose main objective in withholding the information is to cast off the limitations and gender biases identification imposes. The parents hope their decision will provide a kind of freedom their other sons did not enjoy.

While the sex of Kio and Jazz was never in question, the boys’ preferences for what is considered “girl” colors like pink and purple and for occasionally wearing dresses and long hair have been the subject of ridicule. Witterick and Stocker envision a different world for the generation they are helping to raise, one in which babies are not labeled and saddled with a host of expectations before he or she can even crawl or communicate. Their decision has drawn both support and scorn, but most importantly, perhaps, it has stimulated some thought and reflection on the issue.

Certainly for me it has. Why is it that when a child is identified one way or the other certain toys or items are deemed inappropriate? Without knowing the sex, however, any object or toy suddenly becomes perfectly acceptable for the child’s attention. Simply by virtue of not knowing, possibilities for the child become endless. In that light, societal conventions seem rather arbitrary, judgments meaningless.

One couple in North America made a personal decision regarding their family, but that decision became a broader question for society as a whole. In their own private lives, the family challenged the norms and mores of society. Is it time we all do so? Or is this going too far?

Four Montclair Residents To Run For BOE Seats in November