Summer is bee season. Or so it has always seemed to me. But perhaps it’s simply that this is the time of year when we cross their paths the most: sucking clover on our lawns, visiting us at the grill, the occasional stray floating in a pool. Or maybe I’m just paying more attention to them, after a chance encounter this past spring opened up a world of bees that I had never considered. And it goes on all year long.

At the Presby Memorial Iris Gardens’ May plant sale, a buzz was in the air. But it wasn’t about the annuals and perennials on display. It was the buzz of thousands of bees that had swarmed over the field of irises just beyond. An Iris Garden staffer rushed by, cell phone in hand, and I heard in a voice of slight panic, “The beekeeper is on his way!”

Somewhat daunted by the swarm, I ducked inside to the gift shop and the Studio Montclair art show. When I came out about 20 minutes later, a great deal had happened. In a tree right alongside the plant sale area, the bees had “landed” and a vertex of branches now looked filled in with a mass of black—a gently undulating mass, as the bees considered if this could become their new home.

But it was not to be (er, no pun intended?), as there, too, was a figure covered in white from head to waist, a veil covering his face, a wooden box at his feet, moving deftly up and down a ladder, back and forth between the box and the tree. He was luring the bees onto “frames” that would slide vertically into the box and soon become a new hive—a royal society that is home to tens of thousands devoted to their queen, to the pollination of the earth, and to the production of honey.

I had but one question: Who was that masked man?

Joseph Lelinho, of Hilltop Honey in North Caldwell, has been the beekeeper at the Iris Gardens for three years. He keeps a dozen hives there that do their part to enhance the glory of the largest collection of display irises in the country. (Plans are in the works to sell honey from these hives in the Gardens’ shop.)

The bees that swarmed the plant sale were not from Lelinho’s hives, but from elsewhere, bees that had likely outgrown their previous hive and arrived at the Iris Gardens in search of new pasture. Lelinho called them “found bees” and they are now part of his carefully tended flock.

The Iris Gardens is only one of many of Lelinho’s “private” clients in Baristaville. Another might be on your very own block.

We learn in elementary school about the importance of pollination, essential to the reproduction of all plants, and that bees play an enormous part. Yet in our own backyards, say, during a summer BBQ, or worse, in an attic or crawl space, bees are typically regarded as the most unwelcome of pests. A local bee expert may be called in to remove bees from a property, if homeowners or landscapers don’t take matters into their own hands with chemicals and pesticides.

But a new backyard trend is taking hold one hive at a time: Bees are invited to set up their home base in a yard, even a stone’s throw from a swing set or patio table, and go about their important work, a fascinating symbiosis of human (part homeowner, part beekeeper) and insect. Here, their presence is observed only with awe and enthusiasm.

Lelinho has about 12 backyard bee enthusiasts as clients in Montclair, Glen Ridge, Verona, and other towns. Usually he places two of his hives in their yards, some as small as a quarter acre. He describes his clients as “bee havers” and the relationship is this: Homeowners ask Lelinho to keep his hives on their property, their perennial plants reap the benefits of key pollinators living—and working—on site, and when the hive is mature, they enjoy a family-size portion of honey produced in their very own backyard. (A thriving beehive can produce as much as five gallons of honey.) Lelinho, in turn, is able to keep more hives than he has space for on his own property, tends to the hives regularly to ensure they are safe and healthy, and sells the remainder of the honey he harvests from his porch at Hilltop Honey and at various events throughout the year.

And as bees work up to two miles away from their hive (their internal radar trumps that of most living things and always returns them home to their queen), the collective plant life of the entire community benefits.

Claudia Waters, of Montclair, has had one of Lelinho’s hives in her yard for four years. Acquainted with the idea of keeping bees, and a lover of nature, she thought it would be a great learning experience for her family. “We were a little intimidated at first, but now are comfortable and have a peaceful coexistence with the bees,” she said. “But we are onlookers. Joe is in charge of the bees.”

The first hive did not make it through the winter (a vulnerable period for bees), but the second hive has done well and Waters and her family enjoyed their first batch of honey last summer.

Reactions from neighbors have been only positive. “People often peer over the fence and ask about them,” Waters noted. And her garden? She is quite sure the sugar snap peas have been doing better and better each year since adding the hive.

Eric Hanan, of Glen Ridge (pictured, right), met Lelinho about five years ago selling his honey at a sheep shearing festival. Hanan was struck by his kids’ keen interest in bees, and soon after Lelinho set up shop in the Hanans backyard. “It was good for both us,” said Hanan.

Increasingly fascinated with the business of the bees, Hanan’s own interest began to morph out of the realm of “bee haver.” Lelinho recommended a “Bee-ginner’s Beekeeping” course offered by Rutgers. Hanan attended the three-day intensive and then ordered all the necessary supplies and gear. “Between Joe and this course, I was ready to start my own hive,” he said. His hive and Lelinho’s now live side by side, Hanan’s distinguishable by his daughter’s cheerful paintings.

Because Lelinho visits regularly to tend his own hive, he and Hanan often work together, as mentor and apprentice. “It’s a huge learning curve,” said Hanan. This summer, his hive yielded about three gallons of honey, which he keeps in a bucket with a spout in his kitchen.

From his 50 or so hives, Lelinho harvests about 75 percent of his honey during the “spring flow” and the remainder in the “fall flow.” He has several commercial accounts (including Terra at the Montclair Public Library), but sells the majority of his honey from his front porch. Customers make arrangements to pick up their order and leave payment in the Honey Money Box.

In recent years, it has been suggested (though not scientifically proven) that pure local honey can alleviate seasonal allergies, as it is made from the very pollen that the afflicted are troubled by. (Within 45 miles, as the bee flies, is considered local.) Lelinho has noted a marked increase in customers buying his honey for this reason. Hanan eats a teaspoon a day of honey harvested from his hive and finds his allergy symptoms have been dramatically improved.

Would you share your garden with bees? To learn more about bees and beekeeping in Essex County, visit the New Jersey Beekeepers Association at www.njbeekeepers.org.

Top and third photos are credited to Claudia Waters. 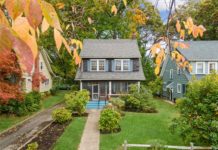 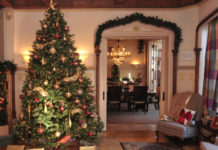