The long drawn out zoning hearings that have gone on for two years in Millburn about a proposed house of worship will draw to a close at the end of January.   The final Millburn Zoning Board of Adjustment meeting will be held on Monday, January 30 at Hartshorn School, 7pm.   Another followup meeting, which may be the last, is scheduled for February 13.The zoning hearings about the rabbi’s application to turn two properties at No. 1 and No. 7 Jefferson Avenue in Short Hills into one property to be used as a house of worship have been going on since an out-of-court settlement of a lawsuit filed by the township against the rabbi in 2009.  Although it is a divisive issue, the meetings have gradually dwindled in attendance.  Eileen Davitt, zoning officer, says that lately attendees have fit comfortably in the regular meeting room at town hall.  Mike Becker of Save Millburn, an organization strongly opposed to the rabbi’s plan, said that people have told him “let me know when I can speak,” since public comment is always saved for the end of what are often long meetings.

That is why what are scheduled to be the final two meetings on the issue are to be held at Hartshorn School, which can comfortably hold much more than 100.  Davitt expects that all of the February meeting and half of the January meeting will be taken up with comments. Any interested party can speak, including non-residents.

Business at the January meeting will include testimony from Ciro Gamboni, who owns an adjacent property; Rabbi Bogomilsky, and Township Planner Paul Phillips.

Lawyers for both sides have been asked to submit briefs about the case by January 16. 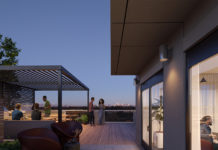