We can thank too much Hoboken street repair for the introduction of Hunger Construction to the Montclair food scene.  Aaron Rosenzweig, a Clifton resident, had been parking his bright red food truck around Hoboken, but his staff found the traffic challenging, so he’s here, closer to home. And that’s how the Stuffed Baked Potato arrived to Watchung Plaza. The truck’s first day was last Thursday, July 19th, and already it has proved successful. “We’ll stick to Watchung Plaza for now,” Aaron explained, adding that Walnut Street station is another planned destination. Those hungry for breakfast or dinner potatoes should follow Hunger Construction on Twitter or Facebook for where they’ll serve up hot potatoes next.

And yes, you read that correctly. He offers a Stuffed Baked Breakfast Potato. Two, even!  There’s Cheesy Street, which (as you might suspect) has Cheddar-Jack cheese and scrambled eggs. Or, for a little extra flavor, there’s the Western Way potato that adds ham, peppers, and onions.  All in the potato!

The lunch/dinner potatoes are more extensive. Vegetarian options with plenty of beans and veggies are available, and there are also potatoes with beef, chicken, turkey, or pork. The sides (called Side Streets) include mac-n-cheese, corn, and salad.  Prices range from around $3 – $8, depending on toppings. Check out the full menu at the Hunger Construction website.

For now, we can order The Original Stuffed Baked Potato during morning and evening “rush hours.”  Helping him serve up potatoes is family friend, Sally Owens. Sally runs So Tasty Vegan, a vegan catering business, here in Montclair.  When I found Aaron parked next to the Watchung train station at around six yesterday, he had five potatoes left. According to the Hunger Construction Twitter account,  they sold out after I’d gone.

Did you get a chance to try one of Aaron’s Stuffed Baked Potatoes? Let us know what you thought in comments. Hunger Construction’s Original Stuffed Baked Potatoes join The French Quarter, Thai Elephant Truck (the truck drops by Walnut Street train station) and a Montclair’s farmer’s market favorite Taqueria Autentica. 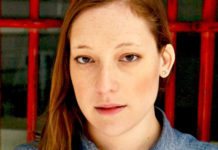 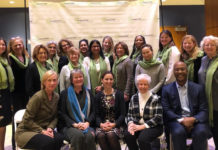