Keeping a roof over a family’s head, when that family has no means to pay for urgently needed repairs, sounds like an inspired idea, but Roof4Roof, the nonprofit arm of a Montclair based roofing company is actually finding it challenging to locate prospective “customers” in the tri-state area. The situation has prompted company owner/founder Chuck Anania to pedal his bike across 130 communities in New Jersey, New York and Connecticut to raise awareness of the work they do.

His trek began on Tuesday morning in Trenton, and he is expected to cross through Bloomfield and West Orange on July 28, and Montclair and Verona on July 29, en route to covering 500 miles over a two-week period. He hopes to end his journey in Manhattan’s Times Square on August 7.

“I’m over 300 pounds, I’m not Lance Armstrong, I’m closer to Governor Christie’s younger brother,” Anania said. “But this is something I could actually do and raise awareness.”

Reached at the end of his first day, Anania reports he took one wrong turn, “hit the wall about four times, kept going, but finally had to stop for the day and rest.” He cycled about 35-40 miles Tuesday, and has the support of one assistant following in a Roof4Roof truck and another helping spread the word as he goes. He’s taking mostly quieter county roads and ended his day in Manalapan.

Anania’s for-profit division, Certified Roofing, is located on Bloomfield Avenue; he has been in the roofing business for 21 years. Roof4Roof has built roofs and made emergency roofing repairs at no cost for needy families in communities throughout New Jersey, as well as in New York, Connecticut, and even Columbia and Guatemala. He says for every paid roofing job the company handles, they donate a roof.

You can follow along with Anania’s bicycle trip progress via Roof4Roof’s Facebook page and the town-by-town list of communities he’ll be pedaling through each day. And the Star Ledger has more on the story too. 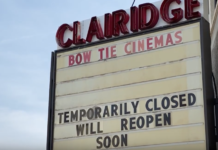