Last night’s presidential debate was moderated by an unintrusive Bob Schieffer of CBS. Some critics would say he was “geographically-challenged” as well. Though the discussion was supposed to focus on foreign policy, Schiffer basically never left the Middle East until the last few minutes of the debate when he asked the candidates about China.

It was, however, an improvement in moderating over the first debate on domestic policy, which was less mediated than simply hosted by a sleepy Jim Lehrer of PBS.  At least the candidates weren’t literally circling each other in displays of aggression, as in last week’s town meeting affair, which was refereed by a game Candy Crowley of CNN.

What did you think of Schieffer’s handling of the debate? How would you compare him to the other moderators, including Martha Raddatz of ABC, who presided over the vice presidential debate earlier this month? 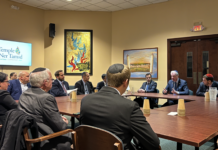