This week’s police blotter from DLt. Angel Roman of the Montclair Police Department:

Upon our arrival into the Pathmark security office, I met with the Security Director and Pathmark’s Store Manager, who had detained Marc Volpe, a 35 year old Hainesport NJ man in the security office until our arrival.  Mr. Volpe placed a large amount of baby formula into a basket and attempted to exit the store.  Store Security was able to stop Mr. Volpe from fleeing the store through the back door. Volpe was found to have the following in his possession.

Prior to performing a search incident to arrest, Mr. Volpe indicated that he had a syringe in his jacket used for heroine. After securing his jacket, Mr. Volpe was searched and placed into the back of car 211 and transported to headquarters without incident.    While performing an inventory of Volpe’s property, officers found several small clear zip lock baggies in the back right pocket of his jeans along with glassine envelopes with heroine residue on them.  Mr. Volpe’s jacket contained 1 complete syringe rolled up in tissue paper.  The syringe, glassine envelopes and baggies were logged into evidence and turned over to the narcotics bureau.  Mr. Volpe was charged with 2C:36-6 (Poss / hypo syringe) and 2C:20-11b(2) (shoplifting).  Mr. Volpe has a Warrant (E12-1817) from Glenridge for $279 and Warrant (S 2012-000160) from Delran NJ for $5000.00. Bail was set on Volpe at $2500.

The vehicle inventoried and there were no items missing.

An Officer responded to Park Street Automotive to attempt to locate any evidence regarding this incident.  He noted broken automotive glass in front of the building in the front driveway.  Also, while checking the area, the Officer took note of a video camera that records the front view of the building.  As the business was closed, it was not possible to determine its coverage area or functionality. 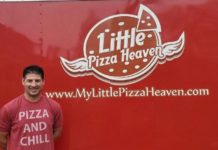 more from Peter for Montclair Councilor-At-Large - 2 days ago