This year my seven year old son had his heart set on being a chameleon for Halloween. Being a good mother of the ’80s, I pulled up the video of Culture Club’s Karma Chameleon to get in the mood to create. This left me with many questions that seemingly didn’t bother me 30+ years ago: Why are they on a riverboat?, What are those two small children stuffing into that big basket?, Was “Good dancers need not apply” posted during auditions?, and What is under the tarp upon which is Boy George singing?

Anyway, I came up with a Chameleon Costume. It’s  fun and original—and requires NO SEWING! There is loads of cutting and gluing, but the results are fantastic! So start cutting out your red, gold and green…red, gold and greeeeennn.

Step One: Dye if needed
If you need to dye your sweatshirt and or pants fill a large bucket or work sink with hot water to complete submerge the clothing. Add one half packet green dye and one half packet yellow dye and stir (with something you don’t mind turning green) until dissolved. After about an hour drain and hand rinse well about three times. Put into the drain/spin cycle of you washing machine and then into the drier.

Step Three: The front
Starting with the front of the sweatshirt lay out your yellow circles first, following the picture in the slide show. Glue down the circles. Repeat this step with the bright yellow, yellow-orange circles and then the Kelly and dark green circles. Lay the 3″ light circles down on the sleeves and glue them followed by the Kelly and dark green circles.

Step Four: The dorsal crest (the back fin thingy)
Measure the length of the sweat shirt from the bottom of the hood at the neck to the bottom of the sweat shirt. Double up a bright green piece of felt to the length you have measured to about 6″ wide. Draw a jagged dorsal crest on with a pencil and cut out the crest with the fabric doubled up so both side are even. Try to cut the pencil marks off.  Run glue down the edges a section at a time and press together being sure to leave the straight side open. Open up the straight side and place on the back of the sweat shirt and glue down each side so they are about 3″ apart at the middle tapering down at the top and bottom.

Step Five: The back
Fold the sweat shirt in half (see photo). Place the 3″ light green circles down and glue followed by the smaller dark green circles, the large turquoise and smaller blues. Making sure to cover the fabric line if the dorsal crest. Add some orange and red circles to the elbows.

Step Six: The eyes
Take the two 4″ circles and cut through each to the middle halfway up. Using the eraser side of a pencil dip into your yellow paint and stamp out the dots (see photo). Let dry. Cut a small circle in the middle of the eye about the size of a dime. Fold the cut sides one over the other to make a low cone shape and glue in place. Glue two small black felt circles under the cone.

Step Seven: The head
Double over the bright green felt to about 18″x 12″. Trace out your head (see photo) and cut. Glue the two top sides together leaving the bottom open. Stuff the top of the head fin with a bit of stuffing to keep it from flopping over when worn. Fit the head over the hood and glue in place leaving  the very front  open for the tongue. Make sure the fin is stiff before gluing down so it doesn’t flop over.

Place a small amount of stuffing in each eye and glue one on each side of the head. Paint dots on using yellow, white, green and light blue paint. Finish by adding the mouth with black paint and a small dot of white on the black of the eye.

Place and glue down some large green, Kelly green, yellow and orange/yellow circles.

Step Eight: The tail
Double over a piece of felt about 18″ x 24″. Now with a pencil draw out your tail making sure that it will not be too long for you child. TIP: Have them put the sweatshirt on and measure out how big of a tail will work for their size. My son is a size 7 and I made his tail is 13″ x18″. Start gluing the tail together from the smallest part about 2″ at a time stopping to  push stuffing in with a chopstick or pencil. As you get to the larger part of the tail you can glue together in larger sections. Cut off any messy or jagged edges. Paint stripes on with yellow and white paint and let dry. Have your child try on the sweatshirt and measure where the tail should be glued on inside. When the sweatshirt is off glue down the tail well.TIP: If the tail unravels a bit when hanging you may want to glue to hold in place.

Check for any loose felt bits, glue them down and you are done

Check out the slide show for step by step images:

Felt, hot glue, ribbon and Rit dye  all available at I’ve Got a Notion or Jo-Ann Fabrics (all supplies including paint)
Sweatshirts and pants from Kohls or online in white or green at Jiffyshirts.com

Need more costume ideas? Click here or on the Costume link under Crafts above for a bald eagle, goddess, shark, owl, luna moth and other ideas.

Costume questions or answers to my questions above?  Just Ask (or answer) Holly in comments. 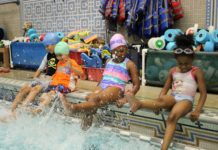