So many movies, so many choices, so little time. What’s a viewer to do?

Well at least when it comes to Netflix, you could ask Norma Casabona. Her site is a new place for reviews, commentary and tips on what streaming movies and TV series to watch.

Norma’s Streaming Picks primarily speaks to Boomer-aged movie buffs and focuses on what’s currently available in the Netflix stream. In the future, the site will expand to offer links and coverage to films and shows on other services, like Hulu and Voodoo.

For each film or series profiled on the site — which carries the tagline, “A Baby Boomer’s Recommendations for the Best Instant Queue EVER!” — she offers a Snapshot Plot (main storyline) and a Parting Shot (recommendations, tidbits), as well as embedded film trailers.

Norma started the website — which offers a free weekly e-newsletter — earlier in 2013, after thinking about it for months. A former actress, public relations specialist, movie reviewer for radio, and radio network manager, she was looking for a new venture and realized she wanted it to revolve around movies — a love that stretches back to her childhood.

“Mom always had on several a movies at a time on different TVs in the house. I love cinema, screenplay, scripts, how it all works together to make magic. Movies never die for me – they live somewhere in my head,” she explains. “When I started using Netflix, I realized there might not be enough sources to help viewers weed through all that clutter. You could spend an awful lot of time wading through reviews.”

Norma had something a little more personal in mind. Something that provides insight about the art of a film, its cultural references, and, for older films, places them into the larger context of their original release date. Otherwise, she explains, “For the slightly older titles which are normally available through streaming you would have to wade through tons of trailers and then search for the reviews that came out when the titles were released. I happen to have a freakish capacity to pour over countless titles and trailers, ad nauseum.”

Why boomers? “Well, I’m in that category,” Norma acknowledges. Twenty-somethings are probably not going to share my tastes.”

Her PR background — she worked on the campaigns for the Clio awards and helped launch Doubleclick — is standing Norma in good stead, as she takes her site to the next level. On the tech side, she’s tapped the expertise of her husband, Mario Casabona, who created TechLaunch, New Jersey’s pre-eminent technology accelerator, housed at Montclair State University. And, she called on the services of a cousin in Glen Ridge, Giovanna Rizzo, a recent graduate of Kean University with a degree in Visual Communication and Graphic Design, to co-design the site.

Now a Kinnelon resident, Norma lived in Cedar Grove for a decade. 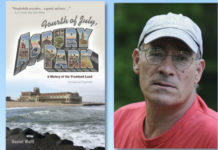