Tonight, Saturday, October 19, Montclair will celebrate what would have been the 65th birthday of the late John Finnegan, a key figure in the Montclair music scene during the decade prior to his passing two years ago on Septeber 7, 2011.

Finnegan was a big supporter of the Library’s Tuesday open mic. He was quietly philanthropic and fostered the arts and music scene in Montclair and its surrounding areas. Proceeds of this event will be donated to Toni’s Kitchen in Montclair.

The evening will include a reception hour with a buffet including “mojo boogie burgers,” live music performed by John’s friends and family members featuring many of his favorite tunes for which he was well known to invite fellow musicians to join him on stage. Everyone will receive a copy of the previously unreleased CD entitled “Finnegan & Friends” recorded just weeks prior to John’s passing by Ken Korreis at The Fine Grind and Studio 12. The CD features guest appearances by many of John’s music buddies. 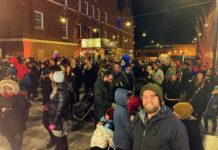