01-22-2014 – On Farmingdale Ave. a rear window was found to be the point of entry in a residential burglary. An I-Pad was taken taken.

01-23-2014 – On Pettit St. a front door was forced open and found to be the point of entry in a residential burglary. Safe containing cash, a Nikon camera, a gold necklace and 4 AT&T I-Phones were taken.

01-24-2014 – On McLeod Ave. a homeowner reported that their home was broken into between 11:00 am and 8:00 pm. The suspect broke a rear sliding door with a brick to gain entry into the home. Jewelry was taken.

01-24-2014 – On the 300 block of West Passaic Ave. between 11:00 am and 6:00 pm a suspect or suspects kicked in the rear sliding door of a residence and gained entry. Cash was taken along with a pink DS game system and a white I-Pad. As part of the investigation a neighbor did report to investigators that they heard a loud bang from the yard around 12:30 pm.

01-26-2014 – A commercial burglary was reported on the 500 block of Bloomfield Ave. where a suspect or suspects broke in through the front door of a business. Witnesses reported seeing 4 male suspects fleeing the establishment, entering a small grey SUV and driving away. At the time of this report it is unknown as to what if any proceeds were taken from the business.

01-21-2014 – In Brookdale Gardens a 1995 Honda with NJ license plates had its ignition damaged in what appears to be an attempt to steal the car.

01-26-2014 – Mr. Jose Mendez age 23 of Newark was arrested by Officer Georgio Antinori at 3:05 am on January 26, 2014 for DUI on Bloomfield Ave. near N 17th St. While on patrol Officer Antinori noticed a black Nissan with front end damage traveling west on Bloomfield Ave. with no headlights on. Officer Antinori stopped the vehicle and while interviewing the driver, Mr. Mendez he noticed an odor of alcohol on his breath. After further investigation Officer Antinori developed probable cause to believe that Mr. Mendez was under the influence and placed him under arrest. Mr. Mendez was transported to Police HQ’s where he was charged with:

A court date is pending in the case.

While working an authorized security detail at 60 Orange St., The Home Depot, Officer Corio was alerted by store security that a male, Mr. Giorgadze was attempting to return $300.00 worth of merchandise without a receipt, which appeared to be suspicious. When Officer Corio along with Officers James Romano and Salvatore Cordi began interviewing the suspect, he became nervous and ran from the scene. The Officers caught up with the suspect a short distance from The Home Depot and placed him under arrest.

Mr. Giorgadze was found to be in possession of 5 different forms of identification and 3 pawn slips from New York.

The arrestee was transported to Police HQ’s and charged as mentioned above and a bail was set at $25,000.00 by the Honorable Judge John Paparazzo, with a court date of 1/29/14 pending.

As previously reported the following arrest took place on January 22, 2014.

On January 22, 2014, Nutley PD broadcast over SPEN radio that they were investigating a occupied residential burglary that had just occurred on Daily St. in their Town.

The victim of the Nutley burglary gave Nutley Police a description of the suspects and reported that they had fled the area in an older model white 4 door vehicle.

Det. Sgt. Michael Sisco and Det. Lt.  Joseph Krentz responded to the area, concentrating their patrol on the Bloomfield streets that border Nutley.

At 2:30 pm the 2 detectives spotted a vehicle with two occupants that fit the description given out earlier by Nutley PD.  The detectives immediately tried to effect a stop of the suspect vehicle on Hoover Ave. near Plymouth Ct. however the suspects and vehicle began taking evasive maneuvers, attempting to elude the detectives.

After a short pursuit the suspect vehicle pulled over on the 200 block of East Passaic Ave., where the passenger, identified as Davon Harrington age 23 from Newark was apprehended by Lt. Krentz as he tried to flee from the vehicle. The driver, later identified as Khalil Gilliam age 19 from Newark, fled on foot into a yard on East Passaic Ave. with Sgt. Sisco in pursuit. The suspect climbed over an 8’ fence where St. Sisco lost sight of him. Officer’s from Bloomfield, Nutley, Belleville, Clifton and The Essex County Sheriff’s Department collaborated and continued the search. According to Lt. Krentz, shortly after the suspect jumped the fence, Officer Hector Cartagena spotted the suspect crossing over Hoover Ave. from east to west and radioed his position to the other officers in the area. Officer Michael Falco located the suspect and again engaged him in a foot pursuit. Officer Falco caught the suspect and apprehended him in the rear yard of a home on Pake St. in Nutley.

The two suspects were transported to Bloomfield Police HQ’s where they were charged as follows:

Bail was set at $50,000.00 by the Honorable Judge John Paparazzo for both arrestees and a court date is pending.

Note: After interviewing the two suspects and gathering evidence, Bloomfield Detectives determined that they were also responsible for a burglary that occurred on Farmingdale Ave. earlier in the day.

While on patrol Officer Rosales noticed an Oldsmobile traveling at a high rate of speed, north on Broad St. with no headlights on. Officer Rosales stopped the vehicle on Broad St. near Watchung Ave. and while interviewing the driver, he immediately noticed an odor of marijuana coming from the interior of the vehicle. When the driver was asked to step out and away from the vehicle, Officer Rosales observed and confiscated two small plastic bags containing a vegetation that he believed to be marijuana which was located in the center console. Mr. Borbon was placed under arrst and transported to Police HQ’s where he was charged with Possession of marijuana in a motor vehicle and given a summons for failure to maintain headlamps.

Mr. Borbon was released on his own recognizance and a court date of 1/28/14 is pending.

01-24-2014 – Stephanie Jankins age 24 of Nutley was arrested by Officer Anthony Litterio at 4:31 pm for shoplifting $98.48 worth of merchandise from a grocery store on the 1400 block of Broad St.  Ms. Jankins was placed under arrest and transported to Police HQ’s where she was charged with the shoplifting then released on her own recognizance with a court date of 1/28/14 pending. 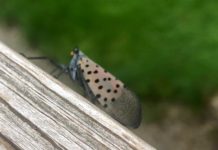