The Bloomfield Police Department Crime Report for the week of 02-24-2014, is provided by Sgt. Anthony J Servedio, and contains a robbery at gunpoint, several arrests, and more:

02-22-2014 – On Martin St. a basement window was broken in an apparent attempt to burglarize a residence. The time of the occurrence is believed to be approximately 3:30 am.

On February 20, 2014 at 2:37 am, Officer Luca Piscitelli conducted a motor vehicle stop of a gold Honda on the 100 block of Bloomfield Ave. after he witnessed the vehicle driving with a headlight out. When Officer Piscitelli approached the vehicle with back-up Officer Sang Yoon and odor of marijuana was detected coming from the interior of the vehicle. The occupants identified as: (driver) Kelvin Norman age 27 of Union City and (passenger) Gerardo Lebron –Loveras age 30 of Newark were instructed to exit the vehicle at which time Sgt. Thomas Icolari noticed what appeared to be a marijuana cigarette inside of the vehicle. Mr. Norman and Mr. Lebron-Loveras were placed under arrest and transported to Police HQ’s where they were charged as follows:
Kelvin Norman-
• Possession of marijuana
• Being under the influence of a CDS
• Refusal to submit breath samples
• Possession of CDS in a motor vehicle
as well as 2 motor vehicle violation summonses.

Both individuals were released on their own recognizance and given a court date of 2/25/14.

02-20-2014 – Jeneve Marshall age 25 of Montclair was picked up from Montclair Police Department by Officers Glenn Capito and Anthony Nardiello after she had been arrested in Montclair for an active Bloomfield traffic warrant. Ms. Marshall was transported to Bloomfield where she appeared in front of the Honorable Judge John A. Paparazzo who released her on her own recognizance.

On February 20, 2014 at 12:17 pm Officers Tiffany Mazza, Joseph Corio, James Peri and Luca Piscitelli responded to the CVS on Glenwood Ave., on a report that 2 alleged shoplifters were fighting with store employees, trying to get away. When the Officers arrived on scene the suspects, identified as Jacob P. Fils-Aime age 21 from East Orange and Belinda Makara age 38 from East Orange were taken into custody. The victim told officers that the male suspect was trying to remove $83.97 worth of merchandise from the store without paying, when he confronted him and the suspect reacted by pulling away and assaulting the victim. At that point the female suspect got involved and tried to assist the male suspect in escaping from the proprietor.
Both suspects were transported to Police HQ’s where they were both charged with:
• Robbery
• Conspiracy to commit robbery
• Being under the influence of CDS
The Honorable Judge John A. Paparazzo set bail at $100,000.00 each with a court date pending. 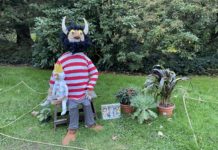