03-18-2014 – The renter of a storage unit on the 200 block of Grove St. reported that a microwave, 2 Lamps and some clothing were stolen from their unit. The theft may have occurred anytime in the last 1 to 3 months.

03-23-2014 – On Rowe St. a homeowner reported at 12:45 am that she was awakened by noise coming from inside of her house. As she went to check on her children there was another noise coming from down stairs. She leaned over the railing to see what the noise was and an audible alarm went off. Officers responded to investigate and observed a second floor window pushed in.

03-22-2014 – On the 100 block of Watsessing Ave. a work van was broken into. Various tools were taken including a skill saw and circular saw.

03-18-2014 – On the lower end of Belleville Ave. a victim reported that 3 parties entered her establishment and took a laptop computer off of the counter.

03-21-2014 – On Carteret St. newspapers were taken from in front of a convenience store prior to opening for business.

03-20-2014 – On the 300 block of Broad St., a victim reported that a Hispanic male and a female entered the CVS. The female took an undetermined amount of nail polish and both parties attempted to leave without paying. While outside the male suspect grabbed a security officer by his sweatshirt and then entered a white SUV and fled the area.

03-22-2014 – At 1:32 am on the lower end of Bloomfield Ave., two victims who work in a combination gas station / convenience store reported that they had been robbed at gunpoint. The victims told investigators that 2 suspects entered the gas station in a white 4 door Infinity. A black male suspect exited the passenger side of the suspect vehicle as second black male suspect stayed in the driver seat. The suspect that exited the vehicle was armed with a silver handgun that he pointed at the outside attendant and robbed the cash he had in his possession. The same suspect then entered the convenience store and proceeded to rob the counter worker of more cash. The suspect then jumped back into the Infiniti and fled the area.

Both Suspects were reported to have been wearing gray hoodies.

A search was conducted however the suspects and vehicle were not located.

Anyone with information is asked to contact the Bloomfield Police Department Detective Bureau at 973-680-4084.

03-22-2014 – 2 juvenile victims reported that while they were inside of Upper Memorial Park, they were approached by a Hispanic male that they described as being 17-18yrs old.

The suspect assaulted the victims and then robbed them of the cash they had on them and fled on foot.

03-18-2014 – On the 100 block of Watsessing Ave. the owner of a vehicle that was parked in the apartment buildings parking lot reported that their vehicle was “keyed” and a tire was flattened.

03-22-2014 – On Beach St. a resident reported that their living room window was broken with a rock at approximately 12:15 am. No suspects were located

One owner reported that their vehicle that was parked on the street and that it was struck by orange paintballs.

The second report was of a vehicle that had also been struck by paintballs but this vehicle also had a tired apparently flattened on purpose.

03-22-2014 – Basil Howard age 47 of East Orange was arrested for DUI and Resisting arrest by Sgt. Edward Dwyer along with other Officers after being stopped for a motor vehicle violation on Bloomfield Ave. near Berkeley Ave. at 10:22 pm. Sgt. Dwyer developed probabale cause to believe that Mr. Howard was driving his vehicle under the influence of an intoxicating liquor or drug. When the Officers attempted to take Mr. Howard into custody he allegedly became combative before being taken under control and arrested.

Mr. Howard was processed for the outstanding warrants for which he posted the required bail amount for and was released on his own recognizance for the current DUI & Resisting arrest charges. A court date is pending.

03-24-2014 – Carlos Yanez age 34 of Bloomfield was arrested for DWI by Officer Luca Piscitelli at 2:06 am on Bloomfield Ave. near Watsessing Ave.

Mr. Yanez was transported to Police HQ’s where he was processed for DWI, issued several other summonses and released on his own recognizance with a court date of 3/24/14 pending.

03-19-2014 – Anthony Luzba age 41 of Moonachie was arrested by Officers Anthony Piccinno and George Guadalupe after he was caught by a store Loss Prevention Officer, allegedly shoplifting $136.29 worth of plumbing supplies from The Home Depot, 60 Orange St.

The Officers transported Mr. Luzba to Police HQ’s where he was processed and released with a court date of 3/27/14 pending.

03-20-2014 – De Guo Li age 31 of Corona NY. was arrested by Officers Thomas Lutz and Robert Kish for Possessing Pirated Movies with the Intent to Sell.

Officer Lutz observed the suspect at 7:34 pm attempting to sell the pirated videos at a local fast food restaurant on the 100 block of Bloomfield Ave. The suspect was stopped as he exited the restaurant and after developing probable cause that he was in fact selling the DVD’s he was placed under arrest by the Officers and transported to Police HQ’s.

Evidence was collected and the suspect was processed and released on his own recognizance with a court date of 3/27/14 pending.

03-21-2014 – Angelo Gonzalez age 32 of Newark was transferred into the custody of Officers Argenis Vargas and Jose Alicea after he had been arrested for active outstanding warrants form Bloomfield and placed in a holding facility at the Bergan County Jail. Mr. Gonzalez was processed for the active warrants and transported for a temporary commitment in the Essex County Jail until either bail could be posted or he could appear in court on 3/24/14.

03-23-2014 – Brandon Ford age 26 of Bloomfield was arrested for shoplifting by Officer Nader Sarabamoun after he was caught by a Loss Prevention Officer, allegedly shoplifting $91.23 worth of merchandise from The Stop & Shop located at 8 Franklin St. Officer’s Sarabamoun and Keron Piper responded to the supermarket took custody of Mr. Ford and transported him to Police HQ’s where it was also discovered that he had an outstanding $500.00 warrant out of Bloomfield. Mr. Ford was charged with the Shoplifting and released on his own recognizance with a court date of 3/25/14 pending.

On March 23, 2014 Ramerell Rodgers age 46 of East Orange was arrested for strong armed robbery of a convenience store on the 100 block of Glenwood Ave.

The victim called police to report that a male entered his store and bought a drink and a lottery ticket then left. Approximately 10 minutes later at 8:15 am the same male, entered the store, jumped the counter and stole cash from the lottery machine cash draw. After the suspect, described by the victim as being: an older African American male, 45-50 years of age, gray hair and wearing blue jeans and a puffy black jacket removed the cash the victim attempted to stop the suspect from fleeing and was assaulted by the suspect as he fled. A witness was able to write down the suspect’s license plate number and notified police. The description was given out and a multi-jurisdictional search was conducted. A short time after the description was broadcast East Orange Detectives Rocchino and Looges notified Bloomfield Officers that they had a suspect fitting the description of our robber in the rear of a residence on the 300 block of S. Harrison St. The suspect was positively identified by the victim and was transported to Police H.Q.’s to be charged.

Mr: Rodgers was charged as follows: 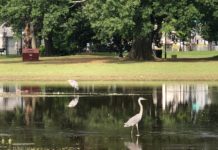