Chamber music from a string quartet filled the air this morning at the September 11th Memorial Plaza at Eagle Rock Reservation in West Orange as the 13th annual Essex Remembers Ceremony was about to begin. Promptly, at 8 am, bagpipes wailed and the Essex County Sheriff’s Office Honor Guard paraded the colors, hoisted the flag and set it at half mast for the occasion.

Songstress Arlette sang “One September Morning,” a song she wrote in 2002 and has performed at each annual event.

“We will see you here year after year as Essex County remembers all 3000 people who lost their lives. We are proud of our memorial because it honors not just Essex County residents but it honors everyone who died at the Twin Towers tragedy. “

The ceremony concluded with Arlette performing “God Bless The USA” as a memorial wreath was placed at the Wall Of Remembrance.

The string quartet then picked up their bows and chamber music filled the air again. These musical reflections continued until 2 pm. 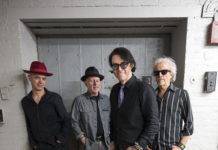