The Montclair Board of Education’s December 15 meeting lasted in to the wee hours of December 16, thanks to long discussions about everything from advanced placement (AP) student testing and board ethics to the Partnership for Assessment of Readiness for College and Careers (PARCC) tests, coupled with numerous participants in the public comment – many of them teachers from Bradford School.  The biggest news turned out not to be the PowerPoint presentations on AP tests and ethical standards but the board’s first reading of a policy that would allow parents to opt out of standardized testing.

While many residents spoke up to express approval of the proposal to great applause, many residents also spoke out harshly toward the board’s policies – also, as always, to great applause.  Resident Christine McGoey spoke for most of them when she said that PARCC was educationally inappropriate, and her husband Michael later said that emphasis on testing would narrow the curriculum while the money spent on the computers needed to administer PARCC came at the expense of developing quality teachers.

The first public commenter, Elizabeth Blaine, was a fourth-grader from Hillside School, who said that while she loved math and reading, she didn’t love the PARCC test.  Elizabeth said that the practice tests included mathematical subjects such as long division and geometry, which she said that she and her classmates hadn’t even learned yet.  She also said she didn’t like taking the test on the computer.

“We have lost six periods due to PARCC preparation,” she lamented.  “The preparation is for the technology on the test.  She said she found the drop-down menus difficult to master.  Board President David Deutsch thanked her for enunciating her concerns very well.

Bradford School teachers, many of whom are Montclair residents, took turns extrapolating on their many concerns, saying that they were troubled by many things.  Examples included an overreliance on the Developmental Reading Assessment (DRA)  to gauge students’ reading and writing skills and not fairly judging the comprehension skills of children who happen to be poor writers, as well as the use of developmental workshops that they said took valuable time away from the students.  Local activist Michelle Fine went one better, declaring that the e-mails of 28 Montclair residents were under surveillance.  She said that a Freedom of Information Act request was filed under a pseudonym with the City University of New York, where Fine works, for eighteen months’ worth of e-mails between herself and Mayor Robert Jackson and several other local leaders, many of whom are black.  Fine said she got the request after she challenged racial comparisons between students on a strategic report, which the happened to have several errors.  She is certain that the board did not place the Freedom of Information Act request, but she added that such intimidation smacks of McCarthyism.

“I have nothing to hide,” Dr. Fine said.

Several members of the board, including Schools Superintendent Penny MacCormack, expressed shock over the actions taken against Dr. Fine, but Dr. MacCormack said she failed to understand why she should investigate a Freedom of Information Act request the board had nothing to do with.  She said she would post a response to Dr, Fine regarding the data from the report Dr. Fine cited.

The AP testing presentation was spearheaded by Guidance Director Willieneil French, who told the board that the biggest problem with Montclair AP students’ participation in the AP test is that there weren’t more of them.  Although 89 percent of all Montclair High School AP students who take the test earn scores of 3 and above for college credit, only 41 percent of AP students take the test to begin with.  There are 26 AP courses available at Montclair High School in the arts, science, math, language and social studies.

French said that a key to getting more AP students to take the test and earn college credits is to make students and their parents more aware of them, and also provide reduced fees for eligible students (the fee is normally $91). French added that some students may be deterred because there are colleges that don’t accept AP scores as credits.  Board members David Cummings and Leslie Larson were eager to see more involvement by younger high school students, including freshmen, and board member Jessica de Koninck added that a greater effort should be made to include more minorities in the AP program.  An evening information session for AP students is scheduled for February 19.

Board attorney Isabel Machado also addressed the school board discussing ethical practices.  Her presentation was very straightforward.  She said that the board had to shield itself from all local politics and support the efforts of the administration to implement board practices, and not to make any personal promises or undertake private actions to benefit anyone if it may thus compromise the integrity of the board.  When Deutsch asked about publicly discussing issues regarding school policy, Machado said that this was considered ethical so long as such information was public knowledge, this excluding anything said in executive session.  She added that board members are free to consult with her if they feel they might be violating ethical codes.

Toward the end of the meeting, emotions got raw as the clock ticked past midnight.  When Larson complained about the nastiness of comments from some members of the public, resident Marcella Simadiris, a regular participant in public comment at school board meetings, angrily denounced her statements, much to the frustration of Deutsch, who tried to restore order.  Simadiris found Larson’s claim that too many parents were afraid to speak out at board meetings because meetings had been taken over by the Montclair Education Association “unbelievable” and walked out yelling, “Your evil is transparent!”

Also, after midnight, the board debated exhaustively on the purchases of Chromebooks for use in  middle schools and the cost it would involve.  The purchases were approved 4-2, with Cummings and board member Anne Mernin voting no and de Koninck abstaining.

Editor’s note: We welcome comments and encourage different viewpoints. Any comments that involve personal attacks will be deleted. Please do not respond to these comments, but report any comment that is offensive or hostile to us at tips at baristanet dot com. If you are quoted and your name is incorrectly spelled, send an email and we can correct. 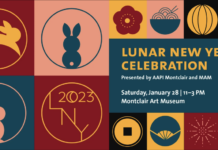 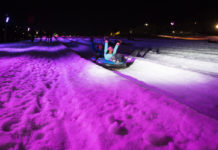 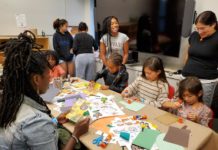