It was always about the numbers. Whatever we did, we did in a crowd. There were 3.4 million babies born in 1946 — a record — and by the time those last two digits had reversed, 1964, we were 76 million. We marched through our lives like an army laying siege: filling schools to the bursting, stomping through the muddy fields of Bethel Farm, rushing into cities in a land grab of gentrification, then boomeranging back to the suburbs and issuing a baby boom echo of our own. Our sheer numbers turned toys — Frisbees, skateboards, hula hoops, Slinkys, Silly Putty — into phenomena. Television was our twin, coming of age alongside us. Together — the boob tube and us — we put the mass in mass media, grabbing the attention of demographers, sociologists and marketers of every kind.

We believed first and foremost in our youth, in the power of so many young people on the planet at one time. Ian Dury’s 1977 song, “Sex & Drugs & Rock & Roll” became our anthem. We were never going to trust anyone over 30. We got smoked pot, giggled through screenings of “Reefer Madness” and thought we had invented irony.

And when finally, against all expectations, we did turn 30, we put our own spin on that too, turning parenting into a game of one upsmanship. Though we were weaned on TV and sugar, we worked hard to wean our offspring off it, meting out both opiates by the thimbleful. We transformed strollers into status symbols, organized our children’s lives into units called “play dates,” made SAT preparation into an industry and turned the college selection process into an arms race.

Then off they went, those magnificently-bred children of ours, and suddenly, with our nests turned inside out, we started to feel old.

But it wasn’t until I went to a Steely Dan concert in my neighborhood a few years ago that it really hit me: we looked old too.

Who were these people — lumpy, gray and stuffed into unbecoming jeans — trudging breathlessly up the stairs of the Wellmont to hear the band that defined mid-1970’s cool? A Brad Pitt ponytail here or there would have been perfectly acceptable, or granny spectacles a la Melanie Mayron. But these people, my peers, the people who’d been outside tossing frisbees when I first heard Dr. Wu, how had they become so fat and old? And, awful to contemplate, was I that fat and old myself?

I can almost see the Millennials and Gen X-ers rolling their eyes, as they have been for years. Yes, we’re old. Google confirms it. If you do an image search on Baby Boomers, what do you see? Not the schoolchildren of “Duck and Cover,” not the hippies of Woodstock, not even the attractive whiners of “Thirtysomething.” What you see are the white-haired denizens of Cialis commercials.

Yes, we’re old; the very youngest of us turned 50 on New Year’s Eve. Old Baby Boomers. It feels to me, if not an oxymoron, then at least epically unfair.

And that, my friends, is now my subject: The myth that plays out over and over again in this country, from the Flappers to the Boomers and eventually to the Millennials, who will one day also outgrow their skinny jeans. But particularly as it applies to my generation.

Because I truly believe, even as our senescence becomes the bookend to our adolescence, that we Baby Boomers will transform old age, returning to the group houses where we roomed in our 20’s, starting disruptive media empires, or going gypsy. Or maybe it’s slightly less dramatic. Like my friends Bob and Anne-Marie deciding to sell their house in the suburbs of New Jersey and move to Maine rather than Florida. Or my four friends (Liz, Lisa, Amy and Patricia) who went back to school in their 40’s or 50’s to become therapists.

It’s partly a numbers game. We’re one out of four Americans, and we have a whole second adulthood to play with, as Jane Fonda said in her TED talk, “Life’s third act.”

Maybe it’s our insufferable entitlement, or a sense of our special destiny.

And maybe we’re just a bunch of babies.

Debbie Galant, co-founder of Baristanet and co-editor for many years, has started Midcentury/Modern, a new collection about baby boomers, on Medium.

Montclair Film Announces the Return of the Kids Art Project 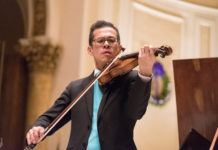