A look at two films from the 10th and final day of the Montclair Film Festival:

It’s easy to see why any festival (or moviegoer) might snap up Dito Montiel’s Boulevard — it’s one of the last films to star Robin Williams, who died in August. Williams is a welcome presence, actually, and it’s somehow comforting to spend more time with him no matter what he’s doing, but this film is not within his comfort zone, nor is it a particularly good film. Williams plays a Nashville banker who gets caught up in an affair with a young male prostitute, while trying to juggle his stoic wife (Kathy Baker), his inquisitive best friend (Bob Odenkirk), and his near-comatose father. The premise could make for a dark exploration of the underside of repressed sexuality, but the style of filmmaking is distancing and impersonal, which clashes with the deep likability of Williams and Odenkirk. The script, unworthy of Williams’ unsurpassed delivery, is borderline comatose itself.

The closing night film of the festival was Unexpected, the third feature of Kris Swanberg, whose husband is Joe Swanberg, godfather of mumblecore and director of Drinking Buddies. Though both direct films exclusively set in and influenced by Chicago, the former Swanberg has a vastly different directing style than her husband—Joe’s freewheeling, mostly improvised passion projects are open and experimental, while Kris’s trite, rehearsed dialogue and repeated insistence on close shots are confining and even unpleasant. Unexpected deals with the important issue of social attitudes toward maternity—Cobie Smulders and Gail Bean play friends and expectant mothers, one a teacher and one a high school student—but ham-fistedly. The acting is barely competent for even a student film. And most notably of all, it isn’t sure what it’s trying to say as a film. After the exquisite Me and Earl and the Dying Girl, the centerpiece of the previous night, ending the festival with a movie that was affirmatively bad was something of a deflationary choice. 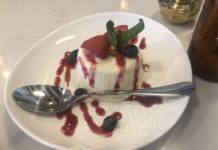