Peter Filichia, the dean of New Jersey drama critics, and I often comment when we’re together how we both wish that, at least in terms of theatre, we had been born decades before we were. It isn’t that we don’t appreciate much of what theatre has to offer today, just that there’s an absence of a colorful and vibrant community to culturally define an era as, say, the Algonquin Round Table did in its day.

Also, most contemporary playwrights seem to be preoccupied with The Human Condition, and compelling as some of their stories and insights may be, it’s rare to see a new play written purely for entertainment value. This is all the more reason Shakespeare Theatre of New Jersey’s decision to open its 2015 season with George S. Kaufman and Edna Ferber’s delightful 1927 comedy “The Royal Family” was indeed a welcome one.

This thinly disguised send-up of the “first family” of American acting, the Barrymores, is indeed dated, yet it retains its period charms despite some misfires in the production. The cast that director Bonnie Monte has assembled proves itself to be competent and talented, yet as a whole it never truly captures the grandeur and unified style that Kaufman and Ferber intended.

Effective and consistent as some of the cast is (Elizabeth Shepherd as the matriarch and Roxanna Hope as her “reigning star” daughter, to cite two), others such as Emma O’Donnell as the maid seem to be making arbitrary comedic choices simply to get laughs. Ironically, perhaps the biggest laugh of the evening belongs to fight director Rick Sordelet, who in the midst of two characters’ swordplay finds room for the type of inspired visual gag the authors would applaud.

Yet while rambunctiously played in a two-level duplex set that has been painted with a curiously drab palate, in many ways this family could just as well be a steel dynasty in Pittsburgh as a legendary theatrical one in Manhattan.

Once you get beyond that, there are numerous pleasures to be had at this revival, most of which are reminiscent of a bygone era. These include the play’s three-act structure, even if the two intermissions do contribute to the evening’s excessive three-hour length.

Regardless, it’s good to be back in the presence of wits like Kaufman and Ferber in this acceptable, if not grand, incarnation. 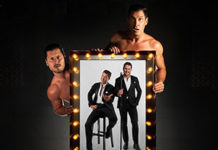