The talented students of Montclair High’s School of Visual and Performing Arts will present Curtain Up!

SVPA’s Showcase 2016, Curtain Up! celebrates the world of the Broadway musical, both behind the scenes and on stage. Curtain Up! features a selection of duets, solos, and classic ensemble numbers. Act One will take the audience “behind the curtain” and behind the scenes, into the world of Broadway’s backstage. Act Two brings audiences front and center stage with numbers inspired by the great white lights of Broadway. Along the way, expect to be wowed by performances of classic musical favorites, everything from Kiss Me Kate to Curtains.

Curtain Up! features an amazing cast of 26, as well as a student tech crew and live pit band, and is directed by Joseph Tudor and Adam Magnacca, with musical director Kristen Dziuba and technical direction by Kenneth Cleerdin.

Don’t miss it! SVPA SHowcase 2016: Curtain Up! will be performed at the MHS Little Theater: Nov 13th, 14th, 20th and 21st at 7:30pm, with a matinee on Sunday the 22nd at 3pm. Tickets available at seatyourself.biz/montclairschoolarts now. 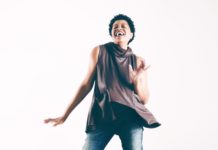 The Badass & The Beautiful Ms. Lisa Fischer Appears at SOPAC, 2/22