Eric Morse, founding editor of Trampoline House magazine and a former executive at Warner Music Group, will read his book What Is Punk? at Watchung Booksellers’ Saturday storytime on January 9.

What is Punk? is a must-read pop-culture primer for children — an introduction to the punk revolution, recreated in vivid 3-D clay illustrations and told through rhyming couplets. From London’s Clash and Sex Pistols to the Ramones’ NYC protopunk, and Iggy Pop to the Misfits, this charming little board book lays the groundwork for the next generation of little punks. Critics rave, “Think Wallace and Grommet with liberty spikes and anarchy patches… images of Johnny Rotten and Henry Rollins are cute, they’re presented as live action dioramas that are adorable, accurate and engaging.” 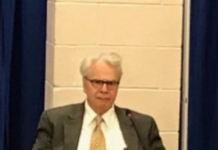 It’s Only a Play

more from Suburban Music Study Club of NJ - 4 days ago