In an article on the New Jersey Society of Professional Journalists website, Debbie Galant writes about Patricia Gilleran, a Bloomfield resident, getting pole-cam video from Bloomfield after Galant submitted an OPRA request.

In 2014, Gilleran asked for a week of security tape footage of Bloomfield’s municipal parking lot. She had been looking into how the town issued parking placards, which she says are valuable because they can be used anywhere in town, and suspected that politically connected people using the municipal parking lot had received the special placards. Bloomfield denied the request saying it was burdensome and a potential security and Gilleran sued using Pashman Stein attorney C.J. Griffin, winning in Essex County Superior Court in June 2014. The decision was upheld, after appeal by Bloomfield, in appellate court. Bloomfield has since appealed the case to the state Supreme Court.

At stake is a case currently before the Supreme Court of New Jersey, which pits a particularly tenacious local watchdog, Patricia Gilleran, against the Township of Bloomfield. 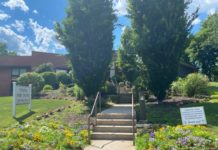