The Princeton Prize in Race Relations recognizes and rewards high school students who have had a significant positive effect on race relations in their schools or communities through their volunteer efforts.

The university awards the prize to more than two dozen students, each working within a particular city or region from across the country.

Any student in grades 9-12 can apply; the winner gets a $1,000 prize and an all-expense-paid trip to a two-day conference on race relations with other winners at Princeton University in the spring. Recipients of the Princeton Prize in Race Relations have stood up to intolerance, worked towards greater inclusivity, and encouraged understanding and harmony in their communities. Some have even been recognized by President Obama for their efforts. Students have described the conference as life-changing, a way to connect with others doing the same work and to improve race relations nationwide.

Shawn Ohazuruike, a Newark student who won for northern NJ last year, who helped found “Diversity Among Peers,” a mentoring program at his high school.

Runners-up, who also received a certificate of recognition, included a Muslim student who was supporting the resettlement of Muslim refugees in her community, and a student working to improve race relations at her high school.

Deadline to apply is January 31. 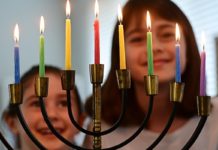