The Montclair Board of Education had an uncharacteristically short workshop meeting on March 29, spending most of the time on policy discussion.  Toward the end, the board spent several minutes discussing a resolution approving the second reading of policies and regulations pertaining to special education.

The importance of the issue was a concern of resident Geoff Zylstra, who spoke about it in public comment earlier in the evening.  He reiterated his points from previous meetings, saying that the district needed stronger research-based programs and blasting what he called “the culture of delays, obfuscations and lies.  He complained that workshops on special education had been delayed too often, and that no one from pupil services had reported on special education.   Zylstra said the board had spent more time talking about robotics and elementary school dancing while cutting millions of dollars from the special education budget.  He said he expected the upcoming workshop, mentioned by Interim Schools Superintendent Barbara Pinsak, to be “powerfully meaningful” in dealing with the issues, and suggested that parents should fund an external evaluation of special education if the workshop was not adequate.  He called for a detailed review of the data necessary to improve special education and look and see why there are discrepancies in the results for black and white special-ed students.

Superintendent Pinsak said the regulations had been rewritten for special-ed supervisors to address student confidentiality and bring clarity to the rules.  Board member Laura Hertzog said there had been complaints that staff had not been rigorous and diligent in following the policies, and the board should be just as rigorous and diligent in clarifying the policies.

“It’s not fair to tell teachers to follow the rules if they don’t know what the rules are,” Hertzog said.

The board voted separately on Policy 2460, which is meant to assure compliance with Part B of the federal Individuals with Disabilities Education Act,  and voted on the rest of the resolution, dealing with regulations concerning different concerns such as location, identification and referral, transition from early-intervention programs to pre-school programs and training needs for professional and paraprofessional staff, as a whole.  Policy 2460 was amended with clearer, rewritten rules, by a vote of 6-0-1, with board member Joseph Kavesh abstaining – the rest of the resolution was approved 6-0-1 with board member Anne Mernin abstaining.  A presentation on special education is scheduled for the next school board meeting on April 12.

The field-trip issue also came up, with a review of current policy stating no parent should have to pay more than $50 out-of-pocket for student to go on a trip.  Board member Eve Robinson said the main issue about the field-trip policy was the definition of a field trip, with no clear delineation between “field trips” that were curriculum-based excursions; school trips for athletic or club competitions; and trips to places such as amusement parks.  Robinson said more pointed language was necessary to address the confusion and set parameters.  The board did not make any decisions, aiming instead to continue talking about it.  Kavesh said that the $50 standard, as currently stated, was “more than reasonable.”

Superintendent Pinsak was also eager to bring up the student focus groups intended to amend homework policy, an initiative she inherited from her predecessor Ronald Bolandi.  While there was information collected from high school students for a focus group there, work on elementary schools was still incomplete, and the superintendent asked for feedback as to whether the high school students should go ahead before the elementary school students in answering questions or whether they should all be in focus groups at the same time.  Robinson said it should be done in time for the 2017-18 school year.

Superintendent Pinsak decided she would arrange for the high school students to present their opinions and she would look at the elementary schools and see what information was really available.

Also, board member Franklin Turner presented the draft of a policy related to student equity based on best-practices research.  Board President Jessica de Koninck recommended that Turner look into existing policies to see where his proposal could fit in, and Turner said he would get back to the board after he did so.  When he asked about the possibility of not finding anything, de Koninck said they still needed to figure out where it would fit in and if it should be adopted as a single policy or if there are different areas within the manual where it should be integrated.  Robinson said the policy committee would be happy to review it.

Superintendent Pinsak said she was impressed overall with the district and the level of commitment to excellence after having toured schools in town, and she was “thrilled” to be working in Montclair.  It became apparent, meanwhile, that she would be there to stay for the time being; Mernin told assembled residents that there would likely be “nothing happening” with the selection of a permanent superintendent by July 1.

Four Montclair Residents To Run For BOE Seats in November 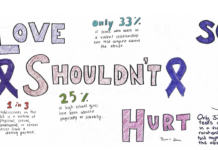 Always in Fashion: MHS Club Sisters on the Runway Has a Purpose