In his debut spoken word album, Words of Overbrook, local writer and Weird NJ correspondent Wheeler Antabanez paints verbal pictures of the abandoned Essex County Hospital Center in Cedar Grove, NJ. This wide-ranging recording delves into the history of Overbrook Asylum from the point of view of a habitual trespasser who grew up near the hospital. It also examines the lives of patients who once called Overbrook home and chronicles the ongoing demolition of the insane asylum.

Wheeler will be reading from his book The Old Asylum at the Montclair Public Library on March 15, as part of the library’s “With the Author” series presented by the MPL and Watchung Booksellers.  He will also perform pieces from his new spoken word album and will be showing a video presentation about Overbrook Asylum.

Overbrook Asylum and the Essex Mountain Sanatorium are the focus for the spoken word pieces featured on the album.  “I was putting down a new floor in my house and it took me about a month to complete.  While I worked, I listened to recordings of the old beat poets and they spoke to me in a new and exciting way.  I found myself writing line-break poetry deep into the night when I should have been sleeping,” Antabanez said.

Prepare yourself for some spooky listening and embark on a journey through the fallen wards of Overbrook Asylum! 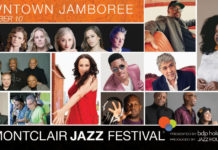