Montclair Film announced at its fundraiser Saturday night this huge news: 2017 MacArthur Fellow and Pulitzer Prize finalist Taylor Mac will perform “A 24-Decade History of Popular Music (Abridged)” at the 2018 Montclair Film Festival. Proceeds from this performance art concert — May 4, 2018 at the Wellmont Theater — will support Montclair Film’s year-round film and education programs.

Mac will be bringing his sold out, spectacular, and critically acclaimed show ‘A 24-Decade History of Popular Music’ show to Montclair, a show The New York Times’ Wesley Morris dubbed “one of the great experiences of my life”.

Mac’s “A 24-Decade History of Popular Music” is an acclaimed, bedazzled mashup of music, history, and theater that decodes the social history of the United States—all 240 years—through 246 songs that were popular throughout the country, and in its disparate communities, from 1776 to the present day. This abridged performance will feature selections spanning the 24-hour work.

Mac is a New York-based theater artist, playwright, actor, singer-songwriter, cabaret performer, performance artist, director, and producer whose many talents combine in “A 24-Decade History of Popular Music,” a singular illustration of our nation’s diverse and sometimes dysfunctional story. In performing the spectacular work, Mac is joined by a band — led by music director Matt Ray, who created new arrangements of all of the songs — plus backing singers and local special guests. The audience is essential to Mac’s spectacular pop odyssey, participating in immersive moments that are by turns deeply touching and hilarious.

Already a 2017 Pulitzer Prize Finalist for Drama and winner of the 2017 Kennedy Prize in Drama, “A 24-Decade History of Popular Music” recently garnered two 2017 New York Dance and Performance (aka Bessie) Awards—for Outstanding Production and Outstanding Visual Design, and Mac has now also been named a 2017 MacArthur ‘Genius’ grant winner.

“I’m deeply grateful to Tom Hall, his staff and board at the Montclair Film Festival who have invited Taylor Mac to participate in this year’s festival. Taylor’s spirit of joy, justice, intelligence and craft replenishes our humanity and awareness and is perfectly aligned with the values of the festival and the unique and diverse community in Montclair. Both Tom and Taylor know how community works and help bring truth into the room,” said Linda Brumbach, founder and director of Pomegranate Arts and executive producer of “A 24-Decade History of Popular Music.”

“We are honored to bring the transformative ‘A 24-Decade History of Popular Music’ to the Montclair Film Festival,” said Montclair Film Executive Director Tom Hall. “We are also proud to partner with Pomegranate Arts to present this extraordinary evening, uniting theater, music, history, and community through the power of Taylor Mac’s visionary storytelling.”

Tickets range from $25 to $99.50, with a special $200 ticket that includes a post-show reception with special guests. This performance features reserved seating, with tickets available beginning today at montclairfilm.org 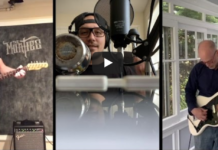