Two new board members were appointed to serve on the Montclair Public Library Foundation Board. The two new trustees are Joanne LaMarca Mathisen and Tim O’Brien. The new members come to the table with extensive experience in the healthcare and media worlds. Their enthusiasm for the library and connection to the community will further strengthen the leadership of the foundation board. These trustees serve as volunteer leaders because they believe in Montclair Public Library’s mission and understand that a well-funded library is vital to Montclair’s interests. Both of these new Board members embody the spirit of community and bring talent, expertise and energy to the table. We are very fortunate to have them by our side, said Jonathan Simon, MPL Foundation Board Chair.

Joanne LaMarca Mathisen is the co-host of Sirius XM’s “Happy Hour” on Today Show Radio, Channel 108.  Previously, she served as Senior Producer on NBC’s Today, the longest running morning news program.  While there, Mathisen won multiple Emmy awards as well as a Gracie overseeing the 4th hour of Today hosted by Kathie Lee Gifford and Hoda Kotb.    Mathisen first joined NBC in 1987 as part of the company’s storied and highly competitive Page Program. She worked her way up to field producer covering, among many other assignments, more red carpet events (Oscars, Emmys, Grammies, etc.) than she can remember. In 1996, she left TODAY for Day and Date, a new daytime magazine show on CBS.  The following year, she moved to the Wall Street Journal’s pioneering (but short-lived) business news channel WBIS, where she helped launch a morning news program. That led to a job as a producer at CNBC, the cable business news channel, from late 1997 to 1999. Then it was back to the TODAY Show, where she was a producer and writer at Later TODAY, co-hosted by Florence Henderson.

Mathisen has been a Montclair resident for the past 14 years and lives with her husband, Tyler, and 12 year old son whom she often writes about in her blog called Old Moms Rock.

Tim O’Brien is currently the Chief Operating Officer at HMH Mountainside Medical Center. In his role he has operational responsibility over the hospital, ensuring services are efficiently designed to meet the needs of patients, physicians, visitors and staff.

Tim completed his BSPH in Health Policy and Administration at the University of North Carolina, Chapel Hill, and his MBA at Vanderbilt University in Nashville, TN.

Tim is married and lives in Montclair with his partner, DeWaal and their two daughters, Dalena (2) and Hannah (1). 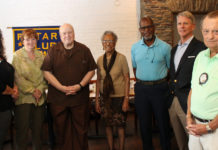