Jamal Liggins, a 38-year-old Montclair man, was arrested and charged with Defiant Trespass, Criminal Restraint, Simple Assault, and Terroristic Threats on Tuesday, July 3. During this incident, Mr. Liggins locked the staff inside the store, verbally threatened them, and then physically assaulted one of the employees.

07-04-2018 (Bloomfield Avenue) Mr. David Sims, 50yoa from Hackensack, was arrested on open warrants totaling $1507. He was also charged with Hindering for providing a false name to Officers on scene.

07-04-2018 (Afterglow Way) Four vehicles were rummaged through, but nothing reported taken.

07-04-2018 (Lorraine Avenue) Burglary to a residence. Cash was taken from a wallet in a rear room of the home.

07-05-2018 (High Street) Theft of a bicycle which had been secured with a combination lock. The lock in question was cut off the bicycle during the theft.

07-06-2018 (Park Street) Attempted burglary to an apartment. Two window screens were damaged but access was not gained to the home. 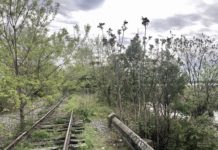