David Fullner and Daniel Auld knew from the moment they began dating that they wanted children and that if they had a son, they would name him Paul, after David’s beloved deceased brother. What they didn’t know is that when their son was born, he would arrive eight weeks before his due date.

When baby Paul was born to his surrogate mother in Hawaii, he was three pounds, 11 ounces.

“I was so scared,” Daniel told Baristanet. “I didn’t think a human (of that size) could survive.”

Determined to help Paul thrive following his fragile start, the new dads wanted to make sure their son had the most nutritious options available. When Paul was about six months old, David, who always loved to cook and worked with his family at the local co-op growing up, began experimenting with making baby food. He started with poi, a fermented taro root that is popular in Hawaii and rich in nutrients and vitamins, and then moved on to other fruits, vegetables and herbs, including ginger and basil. He and Danny are proud to say they never once fed Paul powdered rice from a box.

About two and a half years ago, at the urging of a colleague of David’s, who also works full time at Viacom, the dads began to work on building a company out of David’s delicious, organic recipes. They decided to call it Kekoa Foods – in Hawaiian, Kekoa means “brave warrior.” It also happens to be Paul’s middle name.

Over the summer, “we decided it was either going to happen or it was not,” said David. “So we said, ‘Let’s go for it.'” They hired designers to create a logo and packaging that appealed to a wide range of people, and established a website and a social media presence. They also decided that they wanted their food to go to all babies, not just those who can afford pricier, healthier options. So they launched a Kickstarter campaign for any parent interested in buying their food, but also have an option for anyone to donate food to the Newark YMCA, which has a facility that houses residents, which can include up to 100 infants.

David and Danny say they eventually want to make their home base in Newark and build out the company there, bringing nutritional education and horticultural education to the city.

For the near future, the couple – who have half funded Kekoa Foods themselves and are supported by two investors – will do a full official launch of the company in February and will begin selling on Amazon until they can find the resources to establish a brick-and-mortar presence.

Ultimately, say David and Danny, they want to spread a message about inclusive parenting. “Kids are sometimes being raised by aunts, grandparents, single parents, two dads, two moms, foster parents, etc.,” said David. “We want to provide an inclusive nature where all feel supported because, well, we’re all in this together.”

As for Paul, he is now five, and still loves his dads’ apples with fresh ginger. 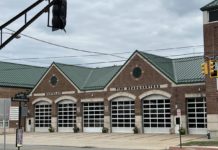