This past Sunday, the Montclair Public Library hosted the annual celebration of Black History Month, Our History: Past Present Future. Matilda Williams, a youth services assistant at the MPL, welcomed the standing room only crowd to the Library’s auditorium, and Eddie Nicholas led the event as Master of Ceremonies. With a slide show and discussion of Civil Rights and Black History through stamps, performances of poems, songs, and dance by young people, words of thanks from Mayor Jackson, and a rousing performance by Jacquelyn Graham, including a rendition of the civil rights anthem “We Shall Overcome” that had the room clasping hands and singing together, and a glowing performance from New Jersey’s international tap dance star Maurice Chestnut, the presentations truly represented the past, present, and future of Black History and Heritage.

Clarence McKnight, who created the inspirational philatelic slideshow of Black History stamps, also had selected pieces of his extensive collection on display. Attendees were able to peruse beautifully displayed stamps ranging from Emancipation Proclamation stamps to stamps commemorating Percy Lavon Julian, Hattie McDaniels, Gregory Hines, Ida B. Wells, and many more. Those interested in learning more about Black History and Civil Rights History via stamp collecting can visit the Ebony Society of Philatelic Events and Reflections site, for which Mr. McKnight serves as webmaster.

The main event for this year’s Black History Month Celebration was a performance by renowned international tap artist Maurice Chestnut, a native of Newark, NJ. He was introduced by his former dance teacher, Paula McCoy who read poetry paying tribute to dance. Ms. McCoy also reminisced on how she knew Maurice Chestnut would be a tap virtuoso as he was always tapping through her classes of African dance.

Appearing in a t-shirt that read J DILLA CHANGED MY LIFE and gold tap shoes, Maurice Chestnut took the stage to an appreciative room. With a band that included a scratch artist, a bassist, and a violinist and singer, Mr. Chestnut showed his tap skills and made sure the audience understood that tap was a method of communication long before it served as entertainment.

Focusing on the future of tap, Mr. Chestnut also brought two of his students to the Montclair Library stage to perform and promote his upcoming workshops for young people at Newark Symphony Stage. He also performed a tap in honor of one of his heroes, J Dilla, an acclaimed record producer and rapper who died in 2006.

The two-hour celebration concluded with refreshments and conversation in the auditorium. Thank you to the Montclair Library and all the organizers and performers for giving their time and talents towards making the Black History Month celebration another fantastic success. 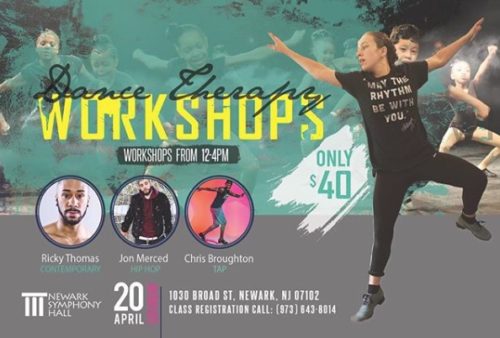 For those who want to see more from Maurice Chestnut, or would even like to learn some moves, his Dance Therapy workshop (for children) and performance (for all) will be at Newark Symphony Hall on April 20th. Dance Therapy was created to bring the art of dance, primarily tap, to underprivileged kids around the United States. It was begun in honor of Chestnut’s niece, Nazerah Bugg, who was killed in a drive-by shooting in Paterson. Tickets for the 7 PM show are just $15 through April 1st. And for those who want both the workshop and show, a combo ticket is available for $50 via eventbrite.