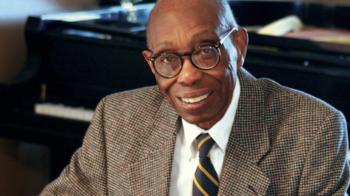 George Walker may not be a household name, but in the world of classical music, he is a legend.

A longtime Montclair resident who died last August at the age of 96, Walker was the first African-American composer to win the Pulitzer Prize for music. That musical composition, “Lilacs,” was based on the 1865 poem “When Lilacs Last in the Dooryard Bloom’d” by Walt Whitman, which was written after the death of Abraham Lincoln.

Walker’s Pulitzer – the unanimous choice by the prize jury – was the culmination of a lengthy and distinguished career marked by many firsts, including “the first African-American pianist to play a recital at New York’s Town Hall, the first black instrumentalist to play solo with the Philadelphia Orchestra and the first black graduate of the Curtis Institute of Music in Philadelphia,” according to NPR.

In an interview with Baristanet, Gregory Walker, the composer’s son and a renowned musician in his own right, said his father could never forget how surreal it all was.

“He was doing things in his community that no one else he was doing,” he said. “But as an artist I’m pretty sure he was just concentrating on quality and originality.”

On March 10 at the Central Presbyterian Church, the Montclair Orchestra will be celebrating George Walker by bringing to life “Lyric for Strings,” his best known and most-performed work. Gregory Walker will be attending the performance as well as appearing at the Montclair Public Library on March 8 to discuss his father’s work and performing some samples of both his father’s work and his own, accompanied on piano by his wife Lori Wolf Walker. “Discovering George Walker,” a documentary by Frank Schramm will also be shown.

Gregory, who grew up partly in Montclair (his parents divorced when he was young), says he remembers the constant music playing in his house growing up, and his father working out fragments of music.

“Music permeated our lifestyle for sure,” he said. His mother, Helen Walker-Hill, was also a pianist and a music scholar.

Today, Gregory says his father’s presence is still very tangible to him.

“There is a strong sense of his continuously being in my life, even now,” he says. “Beyond that, his general approach – his rigor, his craft, the way he pushed himself – plays out in what I do.”

For more information on the Montclair Orchestra’s performance of “Lyric for Strings” (the concert will also feature works by Mozart and Olli Mustonen), please visit http://www.montclairorchestra.org/