Outpost in the Burbs presents Richard Barone’s Music + Revolution: Greenwich Village in the 1960s, featuring Eric Andersen, Jeffrey Gaines, The Kennedys, Steve Addabbo, Tammy Faye Starlite, and Glenn Mercer (The Feelies) on March 29th, 2019. Special guest Mary Lee Kortes opens the evening with songs and readings from her recent book DREAMING OF DYLAN.  Her book will be available for purchase at the show. 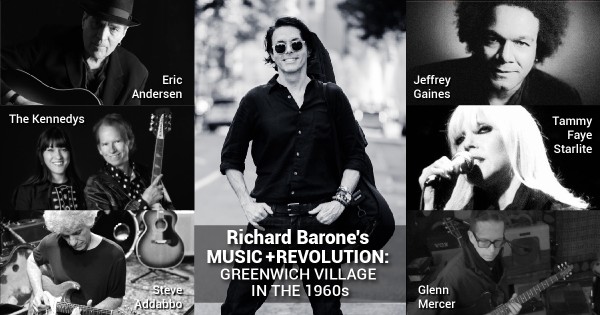 This concert will take place at 8 p.m. at the First Congregational Church, 40 S. Fullerton Avenue.

From the “beatnik riots” to the summer of love, NYC’s Greenwich Village was the epicenter of a revolutionary movement in the history of American music. A new wave of writers and performers, inspired by the folk revival of the late fifties, created introspective, socially-aware, deeply personal songs that deserve to be considered as a key part of the American Songbook alongside the pop songs being written uptown. These writers – Bob Dylan, Tim Hardin, Janis Ian, Fred Neil and Phil Ochs, to name just a few – changed the “folk” repertoire from traditional songs to songs sprung from personal, contemporary experience, as well as from the headlines. This freewheeling concert, hosted by Richard Barone, who pays tribute to that exciting era on his recent album ‘Sorrows and Promises’, celebrates the lasting legacy of that pivotal decade along with an eclectic roster of friends and special guests performing songs that still resonate just as strongly today.

About Richard Barone:
Richard Barone is an acclaimed recording artist, performer, producer, and author. Since pioneering the indie rock scene in Hoboken, NJ as frontman for The Bongos and then helping to launch the chamber pop movement with his solo debut “cool blue halo”, Barone has produced countless studio recordings and worked with artists in every musical genre. Collaborators have included Tony Visconti, Beach Boy Al Jardine, Sean Lennon, Dion, John Sebastian, Alejandro Escovedo, Donovan, Moby, the late Lou Reed, and American folk icon Pete Seeger. He has scored shows and staged all-star concert events at such venues as Carnegie Hall, the Hollywood Bowl, and New York’s Central Park – where he presented “MUSIC + REVOLUTION” this summer. His memoir Frontman: Surviving The Rock Star Myth was published by Hal Leonard Books. His latest album, “Sorrows & Promises”, is a celebration of the early 1960s music scene in Greenwich Village NYC, where Barone lives. He is affiliated with the Clive Davis Institute of Recorded Music at New York University and currently teaches “MUSIC + REVOLUTION” at The New School University of Jazz & Contemporary Music. He serves on the Board of Governors of The Recording Academy (GRAMMYs), and on the Board of Advisors of Anthology Film Archives.

About the featured artists:
Eric Andersen’s voice, songs, guitar and piano playing created a career that has spanned over 45 years. Early in his career, in the 1960s, he was part of the Greenwich Village folk scene. He has recorded 25 albums of original songs, and made numerous tours of North America, Europe, and Japan. His songs have been recorded and performed by world renown artists such as Ricky Nelson, Judy Collins, Sandy Denny, Fairport Convention, The Kingston Trio, Peter Paul and Mary, Linda Ronstadt, Johnny Cash, The Grateful Dead, Linda Thompson, Mary Chapin Carpenter, and Francoise Hardy, plus many others in Europe, Australia, England, and Japan.

Throughout his two-and-a-half-decade recording career, Jeffrey Gaines has maintained an impressive standard for soul-searching, introspective lyrics and catchy, uplifting melodies. Since bursting on the scene with his self-titled 1992 debut album, the charismatic singer-songwriter-guitarist has built a beloved body of recordings that’s won him a large and deeply devoted international fan base.

Now, with a quarter-century of recording and performing under his belt, Jeffrey Gaines is enjoying life and music more than ever.  HIs latest album “Alright“ was recently released. “Nowadays, I know what the job is about, so there’s nothing to stress about,” he says. “I know that there’s people out there who want it, so I have the opportunity to extend their experience, and I’m thankful for that. Even though there’s a long gap between “Toward the Sun” (2003) and “Alright”, this one continues that story and that sound. I guess I could lay my albums all out and see that they tell a story, but personally I prefer to keep looking forward.”

The Kennedys are an American folk-rock band, consisting of husband and wife Pete and Maura Kennedy. They are recognized for their harmonies and instrumental prowess, blending elements of country music, bluegrass, Western swing and janglepop.

Tammy Faye Starlite has come to be one of the brightest stars in the Downtown New York scene. The always peripatetic Tammy maintains a busy schedule of performances, guest appearances and benefits, not only in Manhattan but around the country. In recent times, her startling feats of musical reincarnation she has created a new kind of cabaret. Equally gifted as an actor and singer, Lang deep-dives into the vaults of art-pop-rock-whatever and returns clutching buried treasures. In Nico: Underground– her bio-show, as it might be called – she brings back the late Velvet Underground icon in all of her fuzzed-out, deadpan glory. With mentions of Lou Reed, Bob Dylan, Jackson Brown, John Cale and Andy Warhol, she animates the character providing both historical contexts and up to the minute contemporary references.

Glenn Mercer is the vocalist and guitarist of the North Haledon, New Jersey-based rock band The Feelies. Together with Bill Million , Mercer has written and produced virtually all of the Feelies’ recorded output. The Feelies released three records in the 80’s (including the classic Crazy Rhythms). Glenn also began playing with other locals such as Sunburst and East of Venus, then put out Wheels In Motion. In 2008, he reunited with the Feelies for ongoing live performances, and released Here Before in 2011. The Feelies have continued performing at strategic intervals ever since. Their cover of “Paint It Black” appears in the latest Jonathan Demme movie, Ricki and the Flash. Mercer’s second solo record, the all instrumental “Incidental Hum”, was released in 2015 on Bar None Records.