Hundreds of Montclair High School students walked out of class Friday at 10:00 am, joining students around the world participating in Fridays for Future, an international organized walkout to demand action on climate change on March 15. Here’s what it was like: 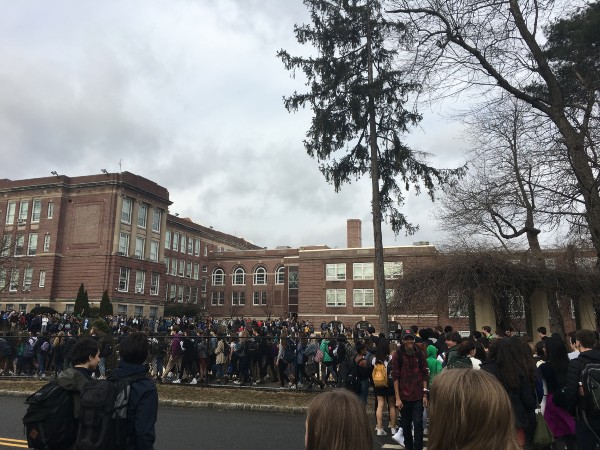 At 10:00 am, you could hear the thunder of footsteps down the halls and voices yelling “Come on!” By 10:05, many MHS students had spilled outside and into the main building’s amphitheater. A hum of soft whispers grew into a louder hum that resulted in security guards hushing students. There was an ocean of green, the designated color of attire for the walkout. Then at 10:10, it began.

A group of MHS student organizers, including Haley Winstead, Hazel Togman, Gabriella McLoughlin, and Saumaya Schneider, used bullhorns and their own loud voices to lead the event. The group began explaining how there will be serious consequences due to global warming in under 12 years. Students held signs bearing statements: “Like the ocean we rise; Our planet, our choice” and “Our house is on fire!” and “Climate change is not a lie! Do not let our planet die!” The walkout ended a little before 11:00, as most students returned to class. However, a few students decided to continue the protest by marching to the Montclair municipal building, demanding action.

How Did Students and Faculty React?

A common theme among students was the idea that the older generation had dismissed the issue and it was up to the younger generation to take action.

Lila Zimbalist, a senior, said “I just think that our generation has inherited a world that is falling apart, almost beyond repair, yet older generations seem to be ignoring the issue with a complete disregard for the future impacts that climate change will have.”

Zach Rich, a sophomore, said “It’s a shift of responsibility that I don’t want because I already have too much math homework and now I’m supposed to worry about climate change? That’s the adult’s job. I’m walking out to politely remind them to do their job, because otherwise when I can vote next year, they won’t have one.”

Mr. Anthony Grosso, the principal of Montclair High School, did not respond to a request for comment.

But Dr. Davida Harewood, a social studies teacher, said “Our system of government is based on participation at all levels. We are granted the right to ‘speak truth to power’ in our constitution. It is very encouraging to see students use their constitutional rights to bring awareness and change. I am opposed to a student being penalized for peaceful active participation in our democracy. However, it is vital that all students be educated … Therefore, I recommend that other civic actions take place outside of school time.”

Organizers encouraged students to reach out to elected officials in the House of Representatives and the Senate, as well as the White House. They also invited students to join the public Facebook group for Montclair, Fridays for Future MTC. It is unclear if there will be more walkouts, but students seem passionate about addressing the issue.

The Climate Change walkout was empowering because so many students united under a common cause.

Haley Winstead, one of the organizers, said “Weather is just getting worse. It is becoming extreme, and unnatural. This is important to me because our lives and any future we are planning on having depend on us having enough support for this movement to force and enforce change internationally.”

Georgia Chen is a sophomore at Montclair High School.