Stacia Thiel considers music her “spirit guide.” Raised in rural Wisconsin by parents who met while studying music in college, Stacia got her first guitar at 16, which she would take out onto the roof of her house and play while composing songs. She sang in her family’s barbershop quartet, got a graduate degree in vocal performance at Washington University and eventually moved to New York to study with an opera teacher.

So it’s no surprise to anyone who knows her – who have been asking for years, “Why aren’t you putting stuff out?” – that she has just officially released her first solo album, “Straight to the Middle.” Narrowed down to nine songs from the hundreds that she has written over the years, including at her kitchen table in her Montclair home, the album is a folksy/alt-country reflection on life, love, and twists of fate. The record aims to explore the emotions that connect us through storytelling.

“It’s been a long process,” she said. “I have been working on the album for a year or two. It’s a labor of love.” 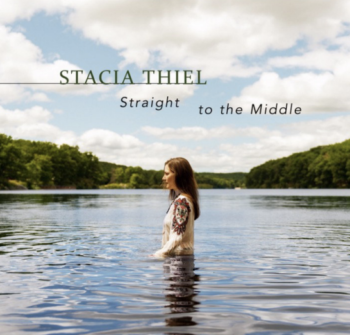 The album was produced by local producer and veteran singer-songwriter Scott E. Moore, whom Stacia met through another local musician, Lily Vakili. Stacia began sending Moore her songs, and he eventually helped her put together a band for the album. For Stacia, the album is the fulfillment of a life-long dream.

“I have wanted to do this for so long, but there was a lot of internal pressure to do it right,” she said. There were also the challenges of everyday life.  As a mom of two, Stacia found it hard to make the “creative shift” to music when here kids were young (they’re now 10 and 12). Now they provide her inspiration. One of her songs, “Stay Stars” was written with them and her dad, who died three years ago, in mind.

Stacia’s album will be officially launched and celebrated at a CD release concert and live performance on March 27 at the Montclair Social Club from 7:30-9:00pm. Her performance will kick off what is to be a series of live performances by local musicians every Wednesday at the club.

She’ll also be performing at a fundraiser on April 14 at the Montclair Women’s Club (2:00 – 4:00 p.m.). As if being a talented musician isn’t enough, Stacia also has a master’s degree in social work and is a clinician at the Family Service League. Held in conjunction with Sexual Assault Awareness Month, the fundraiser will raise money for FSL: SAVE (Sexual Assault and Violence Education) of Essex County, a designated rape care center. The event will also feature a photography exhibit by Celestina Ando.

“I’m so grateful to be able to use my work as a musical artist to help raise money and awareness around a cause and organization I care for deeply,” Stacia said. “It feels like fate.”