Montclair High School Principal Anthony Grosso unveiled a schedule Thursday night to parents that would have roughly 1700 students attending a full day of school at The Annex, but receiving three hours of instruction, an hour for lunch, and three hours of study halls daily, on a four-day rotation, starting May 20, when the main building will close to begin asbestos removal. 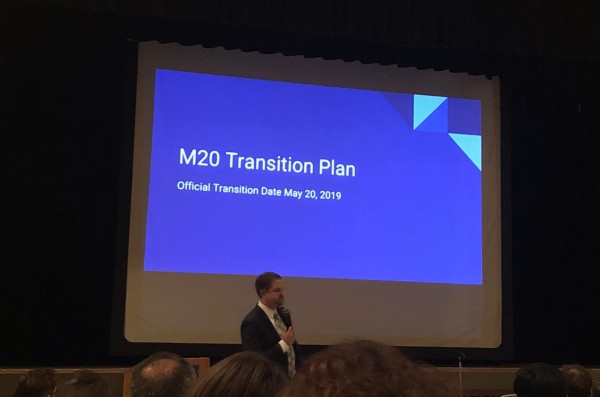 Dubbed the M20 Transition Plan, the Montclair High School May 20 Schedule, given to parents at Thursday night’s meeting shows 24 days from May 20 through the end of the school year, where students would attend either classes or study halls, for 90 minute-time blocks. Freshman were primarily kept together in the A grouping on the schedule, while older student were placed in the B grouping. CGI and CSJ students would remain in classes together. The majority of seniors, some 500 students, will not be on campus as they will be participating in their Senior Option internships.

Attendance will be taken at these study halls, also called “Connection Labs.” Grosso said students would be able to choose from “opportunities they normally wouldn’t have.” These included auditing other classes/electives; taking a college essay writing workshops; participating in a guidance workshop (learning to use Naviance and other tools); receiving curriculum support; or pursuing social and emotional learning opportunities. Grosso also said there would be a Montclair Opportunity Network that would offer students workshops during these study hall periods (Grosso compared them to “Ted Talks”) with local working professionals in various fields. Students could also use the 90-minute blocks of study hall time traditionally — for study in their class subjects. However, there will be no final exams this year, Grosso also announced.

“By cutting finals, the school was able to gain back 5 additional days of instruction,” Grosso said, adding that grades would be determined by quarters 1, 2, 3 grades plus midterm grades in the case of a full year course. For a semester course, quarter grades would be used to determine final grades.

The new plan came as a surprise to parents, since earlier discussions of the transition period involved preserving more instruction time by having students attend school in a split session, a plan initially proposed at an October BOE meeting, featuring a morning block of classes scheduled at the George Inness Annex for one group of students and afternoon classes would be scheduled for another group.

“We did not survey the whole high school parent population but from the few soft contacts we made, the general consensus was that it would not be wise to have kids in school for half a day and then unsupervised when parents are working, so we dropped the idea of having a half day which would still meet the requirement and allow for a full half a day of instruction. What I charged this team with was to come up with a full day schedule to keep kids safe, supervised and give them as much instruction as possible given the physical limitations of space,” said Johnson.

Both Grosso and Johnson acknowledged that the new schedule is a reduction in instructional time.

“We do not have a facility to accommodate all of the sections to continue offering periods 1-8. We looked at different models and schools and how they utilize their daily schedule. This model offered the most amount of instructional time,” said Grosso.

Parents were especially concerned about the excessive amount time students would spend each day in study halls. In some cases, depending on a student’s schedule, they could have a day that’s only study halls and a lunch period. Parents raised concerns about students struggling to remain in those kinds of spaces, how students who aren’t self directed would be impacted and how the needs of students who are active learners and need to move around would be met. There were also a lot of concerns raised about how the shortfall in instructional time would impact students next year, when they have to try and catch up academically.

Grosso reiterated that during these daily study hall periods, students would be offered workshops, curriculum support, or social and emotional learning. “They are never going to be sitting in an area not doing anything,” he added.

Both Grosso and Johnson recommended that parents send questions and concerns to them, via this link.

Grosso and Johnson added that if parents have a different outlook or solution, or if there is something they can present that would allow the school to tweak the schedule in a certain way, they would definitely consider it.

Other changes being implemented during the transition period beginning May 20:

more from MAKOMnj - 3 days ago