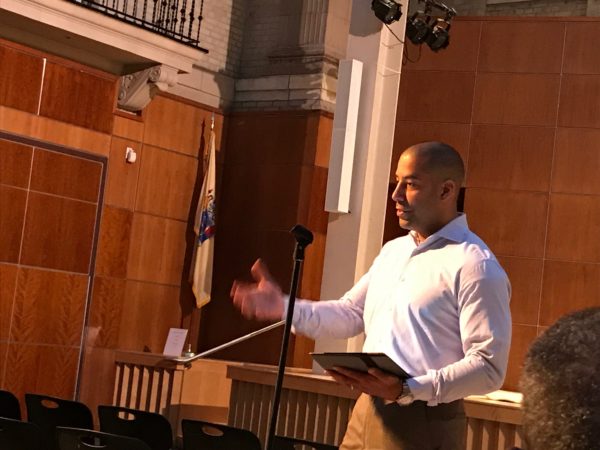 If you live in the Third Ward, then you know the parking stroll. It’s not a viral dance move, it’s the seven-mile-an-hour drive around your neighborhood in search of a parking spot. Help is on the way in the form of more parking decks and pilot program of resident-only parking zones. A plastic bag ban and addressing how to help the homeless were among the other topics discussed at a Third Ward Community meeting at the Montclair Art Museum Monday, April 8.

Deputy Mayor Sean Spiller mentioned that parking decks are in the works along Bloomfield Avenue. There will also be a deck by the Wellmont Theater and another one on Glenridge Avenue near The Crosby.

The deputy mayor also talked about signage by some parking decks that show the number of spaces available. The goal is to have signs like this by all parking decks throughout Montclair.

As far as parking spaces for residents in the Third Ward, Spiller said the town will be creating special zones for residential parking with signage. If that doesn’t decrease the number of illegally parked cars, the town will look at other measures such as towing or booting.

On a related note, a resident asked Spiller about the façade of the parking deck on Orange Road by the Hillside school. The resident mentioned the developer (Pinnacle) said they would put a decorative façade on the deck but have yet to do so. She asked if it would be possible for the town to use approval for future projects as a lever to compel Pinnacle install a façade. Spiller recommended the resident discuss that issue with the town’s planning board.

New Ordinance on Plastic Bags and Straws in the Works

Lyle Landon, chair of the Montclair Environmental Commission (MEC) spoke about a proposed Single Plastic Bag Ban/Fee and Straws by Request ordinance the Commission will be making to the Montclair Town Council. It calls for retailers and food establishments to offer paper and reusable plastic bags for 10 cents. Those establishments would be allowed to keep the proceeds from any sale.

Exceptions to the ban include pre-packaged bags of fruit, pharmacy prescription bags, newspaper bags, and laundry and dry-cleaning bags. The Straw by Request part of the ordinance calls for restaurants to only provide straws on request—preferably paper or metal straws. Landon reported that some restaurants are already complying and providing metal straws so they can be washed and reused. The proposed ordinance will not ban straws or require a fee to be charged.

According to the Natural Resources Defense Council, the average American family takes home almost 1,500 plastic shopping bags a year. Only 1 percent of those bags are recycled.

On the clean energy front, Spiller told residents the Town Council is looking into energy companies that can provide power for municipal buildings at a less expensive rate and from greener sources.

Residents of the Third Ward also talked with the deputy mayor about the new supermarket coming to Lackawanna Plaza. The German supermarket chain Lidl, is different from typical American supermarkets. It’s bright and airy with shelves that are about waist high.

Spiller mentioned the developer of Lackawanna Plaza suggested cars going northbound on Grove Street should be allowed to make a left turn into the plaza, but that proposal was denied because of the potential traffic problems it could cause.

During the Q&A a resident raised the issue of homeless people defecating in the lobby of his building on Fullerton Avenue and asked what he can do and what the town can do about this. Spiller said he was parked around Church Street and a homeless woman knocked on his car window asking for help. Spiller said the first thing people can do is learn about the services available for the homeless and tell the person that help is available. That’s what Spiller did, but the person wasn’t interested. Timothy Stafford, Acting Township Manager, who was at the meeting added “police officers receive specific training, that should be your first call, they know what to do.” A trained officer can respond, evaluate and offer to bring the person to a certain facility for services or medical evaluation, according to Stafford. “But at the end of the day if the person refuses or declines and there’s not a good cause to actually bring someone someplace against their will, then the police officer’s hands are tied,” he said.

“It’s a difficult situation to have,” said Spiller.