More than 25 residents, as well as Fourth Ward Councilor Renee Baskerville, who came to hear from constituents and learn their concerns, toured the area slated for redevelopment. 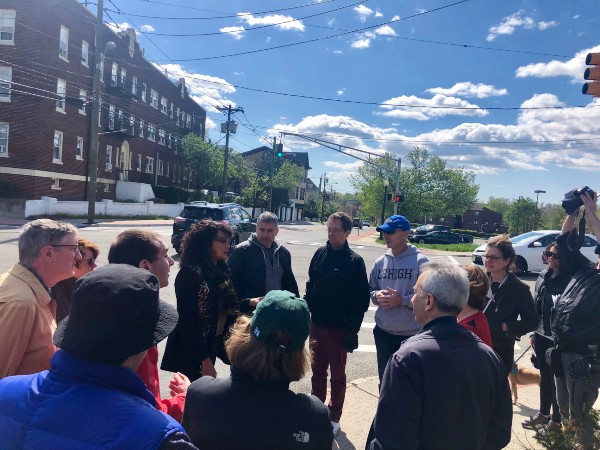 Residents listened to perspectives on the site and the development plans in terms of history, preservation, pedestrian and vehicle traffic, as well as possible environmental effects. They also heard from a developer, though not Lackawanna Plaza developer Brian Stolar.

“I know these guys, they are great people. It’s a tough situation and a tough property,” said Heller, who added that it was a mistake for Montclair when the train station was moved to Bay Street.

Pathmark opened in the mid-1980s, as the then-anchor tenant of the Lackawana Plaza shopping center, to revitalize the site of the former train station. Across the street was the store’s parking lot; today, the plan is to turn the lot into a new residential development.

“They are going to put a four story apartment building, with no setback, right across the street with an underground parking structure and the walkway will be buried,” said Heller, of the pedestrian walkway that currently allows people to cross Grove Street from the parking lot without having to walk to Bloomfield Avenue.

“This is an incredible opportunity for the developer and the town to correct something that happened 37 years ago. This is great opportunity to connect the train station and eventually the Bike/Walk abandoned rail trail,” said Heller, adding “it could be much prettier rather than just a corridor for cars.”

Priscilla Eshelman, who organized the walk, echoed concerns about the public walkway (currently being utilized by patrons of the two remaining stores open in Lackawanna Station — Robertos Pizza and Popeyes — as well as anyone in need of a safe, shortcut to cross Grove Street) being taken away the public.

Baskerville heard the concerns and said she was very interested to determine if it indeed was a public right of way, and if so, how best to reclaim it.

Another sticking point was a new 95 foot driveway for trucks on Glenridge Avenue, opposite the post office, that would take away two metered parking spots. Questions were raised as to why such a large driveway was needed now that the supermarket was much smaller (29,000 square feet) than what was originally planned (47,000 square feet).

Heller also questioned why there would be a need for four loading docks, rather than two, given the much smaller store. Eshelman raised the issue of no pedestrian access from Glenridge Avenue to the proposed store.

Right by the proposed 95 foot driveway, is a fenced triangle where the group could see and hear Toney’s Brook, a tributary of the Second River, rushing below the street. Environmentalist David Wasmuth spoke of the need to explore whether Toney’s Brook, which flows underneath the Lackawanna Plaza redevelopment site, should be daylighted, whenever and wherever it can be, and how the waterway itself could become more of a focal point and a connector to other parts of Montclair, rather than buried under the ground. Other Jersey towns are exploring reclaiming rivers and streams by daylighting buried water ways to bring them back to life.